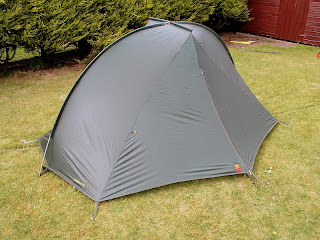 Probably the best solo tent in the world? 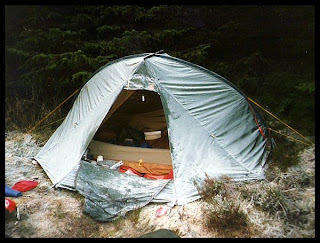 I bought my 1st Phreeranger, pictured above, around 90-92, an EB model to be exact which simply meant 'Extended Bell' The difference between it and the standard Phreeranger/Phreerunner was the style of door. Instead of the 'Bell' (porch) tapering into a point with a single zip the porch was squared off and had 2 zips which meant that the door could be opened by rolling up the center section or either of the end quarters. In addition as the zips were double ended the center section could be opened from the top down. The EB also had a hood at the top of the door enabling you to leave the top few inches unzipped. The single skin Phreerunner was also available in an EB version and is listed in the 1990 Phoenix catalogue, both the Phreeranger EB and Phreerunner EB are listed as new for 1990.

I sold my Phreeranger EB 3 years ago and have regretted it since but recently managed to aquire a Phreeranger standard, the one shown at the top of the page. This is an older model, pre 1988 as the Flysheet doesn't have taped seams while my other one did. The 1990 Phoenix catalogue states regarding flysheet fabric that 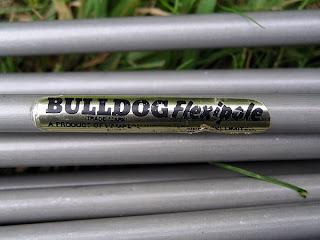 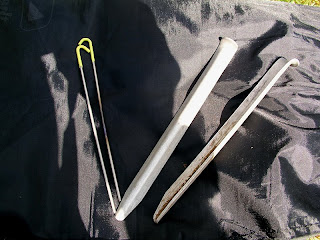 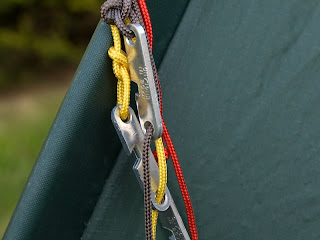 The Phreeranger like all Phoenix tents was highly specced, the poles were made by Hampton Works from 7075 alloy and labelled 'Bulldog', the supplied pegs were v section HS30 alloy (the pegs were so tough that I actually kept mine when I sold the Phreeranger). The guylines while thick compared to todays guys were pretty lightweight at the time being about 2.5mm dia. 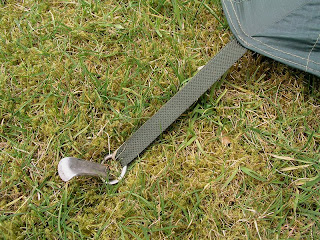 The inner tent on my original EB model had a full mesh door and a full plain door as far as I can remember, certainly there was at the very least a half mesh panel in the door with a plain section to close off the mesh. The one I have now which is an older version only has a 1 piece plain door. The inner tent was made from Supalite 1.5 oz ripstop and had 1 x plastic S hook for hanging a torch etc and 2 x small mesh storage pockets, one at each end of the inner. The inner tent could be kept attached to the fly and the tent pitched as one or it could be detached completely and stored seperately (in it's own stuff sack) if the fly was wet from condensation or rain. 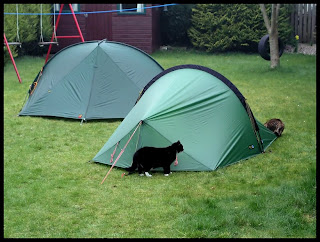 The porch looks quite small on the Phreeranger, even the EB model. In fact the EB porch only extends 60cm against 64cm on the standard model (according to the Phoenix catalogue) but the EB porch has a larger area. I think the Laser has a slightly wider porch however by unhooking the Phreeranger inner tent at the end attachment points and rolling it back to the center line indicated by the pole tension webbing the porch space is massive. With the inner rolled back halfway it can still hold a standard sleeping mat and while it would feel a bit cramped it's entirely possible to use the tent in this manner. The inner could of course be clipped back at the foot end only, creating porch space while still leaving plenty of inner tent space at the head end. 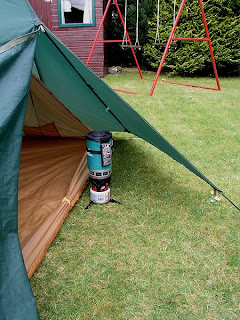 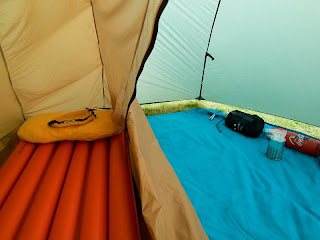 Porch with inner tent hooked back at both ends in line with the pole. Still room for a full size sleeping mat. 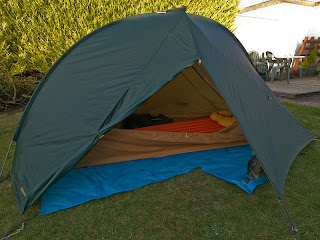 Inner tent hooked back at the foot end with full width at head.


The poles are 8.5mm dia, the main pole has an uneven number of sections thus avoiding a join at the apex and packs down to 52cm

You could be forgiven for thinking that a 20-25 year old tent would be significantly heavier than a current tent but you'd be surprised at how little difference there actually is. I compared my old (pre '88) Phreeranger Standard with my Laser. Taking the pegs and stuff sacks out of the equation there's about 200g difference which isn't a lot really, the Phreeranger pole could easily be replaced with a more modern (lighter)one and the guylines while being pretty light 2.5mm could be replaced with 1-2mm line. Taking into consideration the advances in fabric technology, the difference in flysheet Hydrostatic head (8000mm Phreeranger/4000mm Laser), webbing rather than shockcord pegging points it's amazing that the Phreeranger is so close to the weight of the Laser. There's almost 20 years between them and to be honest I would have expected a bigger difference, I think that speaks volumes about Phoenix and their designers. 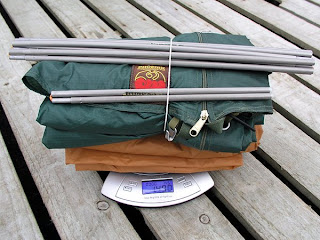 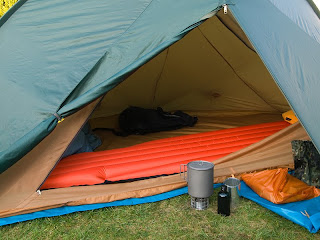 I actually tried it out last night as I wanted to test some new gear for an upcoming trip and figured I may as well use it rather than the Laser, I mentioned that I hoped the temperature was below freezing (testing a sleeping bag and mat) but that I hoped it rained to test the Phreeranger Flysheet. I wasn't entirely serious but the temperature did drop pretty low and it did in fact rain during the night.

I'm delighted to say that I didn't experience any leaks at all although I'd still be reluctant to subject it to strong wind/driven rain given it's age. One other thing was that there was no condensation on the inner whatsoever, I've had problems with the Laser in that respect even with the fly end vents pulled right up, maybe the increased height of the Phreeranger helps prevent condensation. The only problem and one that I was aware of was that the groundsheet is no longer waterproof, however I was pleased to discover that the footprint I made for the Laser also fits the Phreeranger, I guess I just got lucky on that one. All in all pretty respectable for a 20+ year old tent. 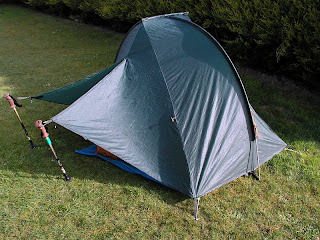 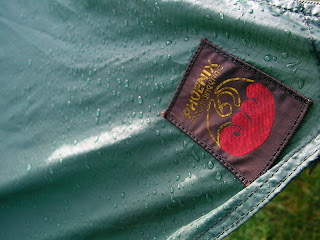 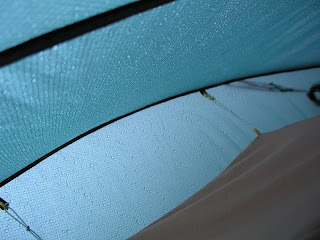 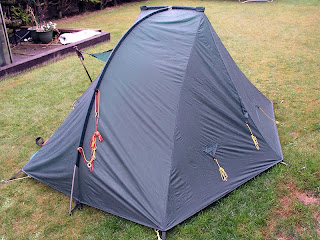 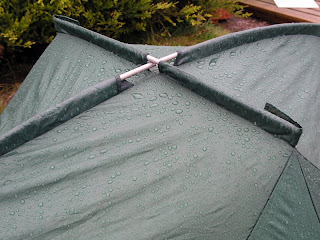 It's a shame that such a great tent is no longer available, without altering the actual design but by simply using modern materials the Phreeranger/Phreeranger could at the very least hold it's own against the Laser/Akto etc.

As far as I'm aware AMG/Vango own the Phoenix brand name and produce Ski Gloves branded as Phoenix, who owns the rights to the actual design is a good question but whether they know it or not they're got a tent thats almost guaranteed to be successful. I know I'd buy one in a heartbeat if it was even remotely close to the RRP of a Laser/Akto, in fact if I found a new old stock Phreeranger EB for sale at less than £300 I'd buy it without a second thought.

Of course you're probably wondering why, if the Phreeranger was such a fantastic tent aren't Phoenix still around and why did I sell mine.

Good question, I can't answer the 1st save to say that a lot of good companies didn't make it and it wasn't because they weren't good at what they did.

The 2nd point, why did I sell mine? well two reasons really, when my girlfriend (now wife) started to come with me we bought a Wild Country Quasar so the Phreeranger wasn't being used much, what with a mortgage and then a daughter I drifted away from backpacking/camping generally so all my gear was packed away (the tents were always stored indoors in a cupboard loosely placed in a large box) so there seemed little need to keep them all. I kept the Quasar and sold the Phreeranger which still had all it's pegs, stuff sacks, instructions and even swing tags, was totally unmarked inside, outside and underneath (I always used a footprint made from a survival bag)

How much did I sell it for?

I mentioned in a previous post that when looking for a solo tent I'd always considered a Saunders Spacepacker but for a variety of reasons always opted for something else, maybe I should just buy a Spacepacker now, a kind of salute to another great tent that has stood the test of time simply because they got it right 1st time, I wonder how many of todays wonder tents will have come and gone before the Spacepacker needs a redesign? plenty I'd guess. 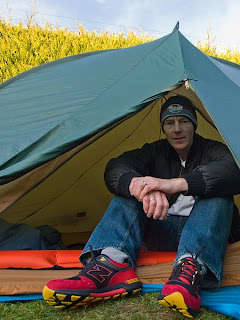