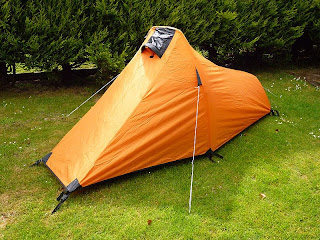 I can resist anything except temptation and after regularly hearing about the Pro Action Hike-Lite(formerly known as the Tiger Paws) on the Outdoors Magic forum I yielded to temptation and got one myself.

The normal price of the Hike-Lite is £50 but they seem to be available at least twice a year at half price in Argos’ numerous sales. The idea to get one came about due to a question about Base Weight on OM. I posted an imaginary gear list that was based around the Hike-Lite as it seemed to offer an amazing amount of tent for the money. When the question of lightweight camping comes up the phrase 'less is more' usually appears and while it’s true that less weight can increase the enjoyment compared to wilting under a heavy pack the statement could apply equally well to cost. It needn’t be so, with shelter, sleeping kit, cookset and stove, cutlery, hydration and lighting covered and a rucksack to carry it all I managed to put together a gear set that weighed in at approx 4.8kg yet cost less than £200. Admittedly you need to add clothing/food/water and various odds and ends but it isn't a bad starting point and you'd spend significantly more on a tent to save as little as 300g although it has to be said you'd be getting a much stronger tent with a vastly better build quality.

In any case that’s how or why I ended up with a Hike-Lite but how good (or bad) is it? 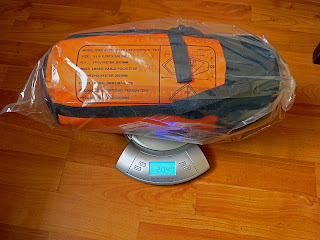 Well starting at the start it isn‘t light at 2040g while still in the packaging. I like to work on the weight of Fly/Inner/Poles as they’re the only parts unique to a tent, pegs/stuff sacks etc are really down to choice. The Hike-Lite weights are as follows, 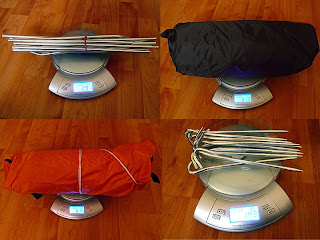 The supplied pegs are reasonable, they’re alloy skewers which both surprised and disappointed me, surprised as I expected steel skewers and disappointed as there wasn’t going to be much weight to be saved by choosing better pegs, the peg set (10) weighs 143g. That said a set of TN 5g ti skewers would reduce the overall weight by about 100g

The tent itself isn’t made to the same standard as the major players but seems usable if utilitarian. There’s plenty of headroom at the porch end and the inner has plenty of mesh panels for ventilation. The inner tent door is mesh only but as I’d consider it a summer (late spring to early autumn) tent that isn’t likely to be an issue. The inner tent has a hanging loop and pocket and the door has a double pull zipper. The outer is taped, there are 3 guylines and the fly attaches to the inner using fastex buckles with adjustable straps to tension it. The door unfortunately has a single pull zipper which narrows the options for ventilation. To further improve ventilation there's a vent above the porch this can be closed to a degree. The poles are alloy rather than the usual fibreglass poles found on most budget models. A compression stuff sack completes the package.

Testing it in the garden it was really easy and fast to pitch, peg the inner at one end, insert the pole ends into the eyelets, clip the inner to the poles and peg the opposite end. It only requires 2 pegs to get the inner standing upright. The fly simply attaches using the fastex buckles and 3 tyings to keep the Fly aligned with the poles (1 each side on the main pole and one for the smaller back pole) The porch is fully pegged by using 1 more peg. Three pegs in total will see it pitched but in addition to the 3 guylines you can use a peg at the webbing loops at the pole eyelets. Fully pegged and guyed it takes 10 pegs. The porch is pretty small and to be honest I wondered if I'd have room to store my rucksack never mind cook in it. It's possible to temporarily increase the size of the porch by un-pegging the inner at the porch, pegging the fly through the loop on the tension webbing and rolling the inner back, this doubles the porch space while still having room to sit upright.

There are a few problem areas which may be due to poor quality control. I noticed that on mine it was virtually impossible to tension the fly to keep the bottom of the flysheet door tight, it could be cured by re-stitching the part of the zip on the door about 15mm further in. The main problem with it being loose is that it tends to flap into the already small porch and makes using a stove even more tricky. I actually kept it back by setting my shoes against it. The 2nd issue is again related to fly sheet tension. The long side panels are a little loose along the bottom hem which could result in reduced inner/fly separation if the wind was hitting the tent from anything other than straight on. This could easily be cured by sewing a webbing loop on each side about 1/3rd along from the main pole but it would require either 2 extra pegs or using 2 of the pole end pegs. There’s one other minor issue, the cord loops on the zip pullers are made from a soft thick cord (same as the guylines) which sticks to the Velcro patches on the flysheet door storm flap, that’s easily sorted by removing them completely or replacing them with a loop of Dyneema or similar. Of course the proof of the pudding is in the eating so I planned to use it on an overnight wild camp to see how it fared. I'll add that later,in the meantime here's some pics of the none too subtle Hike-Lite. 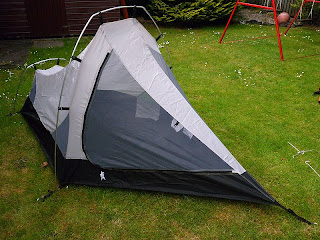 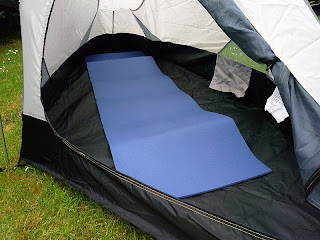 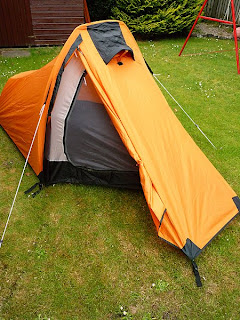 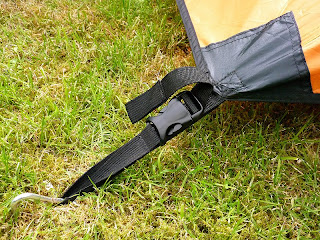 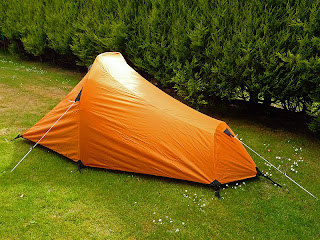 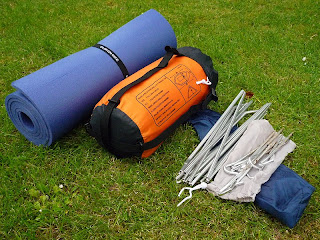