This is an old tip which I found in an MTB mag a few years ago, still it bears repeating. It's always difficult to get the bladder dry in the corners as it tends to stick together, the result being mildewy stuff in the corners which to be honest probably looks worse than it is. In any case there's no need to buy a dedicated dryer, just get a pack of 4-6 practice golf balls, the plastic ones with the holes, shove a few into the bladder and it's job done. 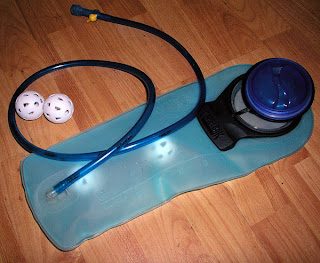 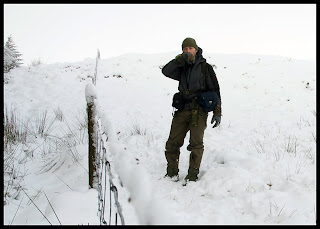 Sometimes I actually make it out of the workshop/garage. We had snow start to fall Monday past and as I knew it wouldn't stay around too long I took a day off work on Tuesday with the intention of heading to the hills. I wanted to try out my woodstove but there was more snow than I expected and I couldn't find wood that was even remotely likely to burn. I had taken my MBD Gramweenies kitchen too so I used it and the included MBD Mini Atomic stove. It worked no problem apart from the fact that I had nothing to set it on except for the backpad from my rucksack. Still, a lesson learned. In the end it was worth the effort as the snow had completely disappeared by Thursday. 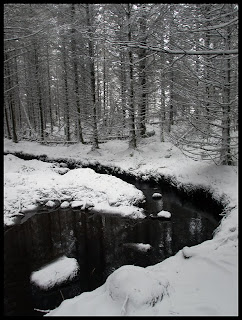 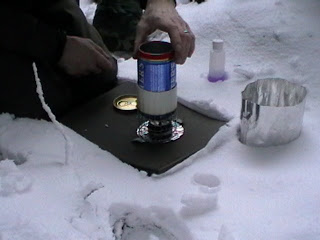 I've just ran a test of my Jetboil PCS to see how it compared to my other mini stove, a Mini Stove C-3 bought off ebay for around £12. I used the same stove in my EtaPower/Gelert test. The procedure was the same as before, 500ml of cold tap water, a new 100g cartridge and I used the same timer and thermometer. I consider 98deg to be boiling as it's virtually impossible to hit 100deg (water actually boils at 99.6deg IIRC. I weighed the cartridge before and after although I didn't video the after boil weight, in any case it was 183g.

I used the same cartridge to test the C-3/Mitymug which if there was any performance drop should have placed the C-3 at a disadvantage, I doubt there was any significant difference.

The Jetboil test is below, I'll add the C-3 Mitymug as soon as it uploads.

After last nights disappointment with the EtaPower 1.0L pot and the Blackfly #4 I decided to try it again. This time I used my gas mini stove and only compared the performance using the EtaPower pot and the Gelert Ascent 2 1.0L pot. In the interests of fair play I started each run with a brand new 100g Primus gas cartridge. I used a thermometer this time to avoid any ambiguity when deciding just what constituted a Rolling Boil. I set the alarm on the thermometer to 100deg but as you can see in the video clips neither pot looked like it was going to hit the magic 100 even though both were clearly boiling. For reference I would suggest checking the time taken by both pots to reach 98deg, both were boiling strongly at this point. For the record the EtaPower pot hit 98deg in 3.25 mins, the Gelert pot reached 98deg in 3.55 mins. Clearly in the tests I've conducted the EtaPower pot doesn't come anywhere close to the advertised 50% performance increase.

The clips below show the EtaPower pot in Part 1, the Gelert pot in part 2.

But in Practice there is!! 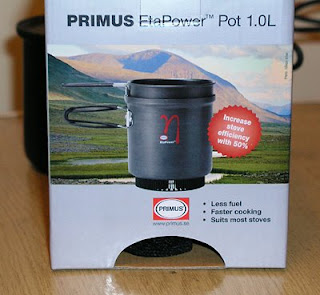 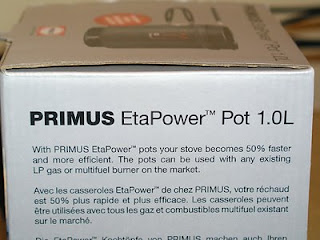 I'm not sure who said it apart from me just now but it's true.

I've been convinced that 'Performance Cookware' was the way to go and that titanium was a poor material to make cookware from due to it being a poor conductor so it was with great expectations that I ordered a Primus EtaPower 1.0L pot to use primarily with my own design woodstove and back-up MBD Blackfly #4. I've been out in the garage testing various combinations and the results are interesting to say the least (well interesting to me)

The set up was the MBD Blackfly #4 (a meths burning wick stove)my woodstove which I built specifically to accept the Blackfly #4 and 500ml of cold tap water. I'd previously tested the same with an titanium Alpkit Mitymug and it took 11.43 to achieve a rolling boil in an ambient temp of 11deg.

The box the Etapower pot came in states,

It does say they can be used with any existing LP gas or multifuel burner on the market but doesn't mention meths burning wick stoves.

I tried it 1st with the 30mm pot stand, time to bring 500ml to a rolling boil? 14.43!! Obviously something wrong there, rather than being faster it was actually 3 minutes slower. I wanted to prove to myself that the Eta pot was in fact better so I switched to the 20mm pot stand, this time a rolling boil in 10.43, 1 minute faster than the previously tested Mitymug. Not IMO significant. I noticed that the Eta pot started to produce steam very early, as early as 3 minutes so I wondered if the lid was a poor fit. I tried again this time using a lid from a Tibetan ti 900 pot which was a much better fit. This made no practical difference (10 seconds) Still desperate to prove my theory correct I re-tested the Mitymug as it was slightly colder in the garage than the previous night (only 3 deg but I was desperate) The Mitymug time was within 15 seconds of the previous test at 11.58, totally insignificant. Finally having accepted that the EtaPower pot didn't even come close to living up to the hype with my stove I tried a further 2 pots, both part of the Gelert Ascent 2 kit, the larger 1.0L pot managed 11.54 and the smaller 500ml pot 11.03

The times were as follows,in each case the pots were filled with 500ml cold tap water, the Blackfly #4 was the source of heat.

What conclusions should you draw? well your own of course :-)

Based on my intended use with my stoves my conclusion is,

The EtaPower pot isn't worth the extra weight over the Mitymug or the extra cost over the Gelert Ascent 2 cookset. There's way too much steam produced by the EtaPower pot for reasons that remain unknown to me for me to want to use it in a tent. Titanium seems to work just as well as aluminium in spite of it being a poor conductor. The smallest pot you can get away with is probably the best and last but by no means least,

The Blackfly #4 is a fantastic little stove. 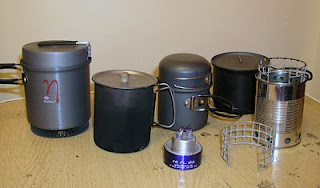 I thought I'd share this short film with you. The cameraman?? is a guy called Philip Bloom. I was given the link a while back by a mate who does video work and immediately liked Philip Blooms work and style. He uses a pretty expensive kit but for anyone shooting short clips on a camcorder (myself included) there are some good pointers (if you watch what he does) on what not to do. Notice the almost complete lack of zooming and minimal use of panning. Keep the camera fixed and let the image move thats what Video is about. Another effect he uses is shallow DOF to isolate the subject, this isn't easily done on a digital video camera, even a Pro spec model, in fact he uses a very clever lens adapter on much of his work, however it can be done to a degree. Anyway here's the clip.


Return to Siberia from Philip Bloom on Vimeo.
Posted by Mac E at 11:17:00 No comments:

I was in Tesco's yesterday and saw a mini LED head torch for £8, never one to miss a chance of a new toy I got myself one. It takes 3 AAA batteries and has 4 White and 3 Red LED's. There's a single switch on top and you cycle through 2 x White, 4 x White and 3 x Red. There's a small rubber seal around the battery compartment so all in all it's pretty good. One thing I don't like is that it cycles through both white LED options before it switches to red, I would have thought switching Red 1st would be the logical progression.

So, today I was in B&Q and while waiting at the till I saw another small LED head torch, this one by Energizer and costing £7.95. It also had a Red/White option. Again it's 3 x AAA but only has 2 x white LED's and 1 x Red, however it has a 2 way slider switch that allows you to select either Red or White. That's a better option IMO but unfortunately it probably isn't as well sealed as the Tesco one. 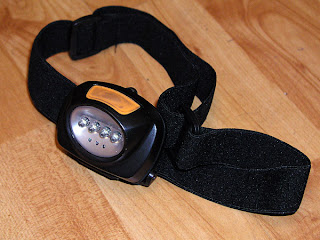 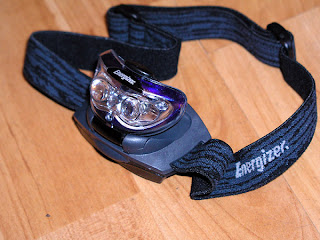 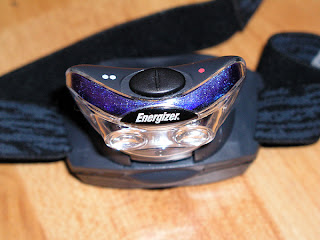 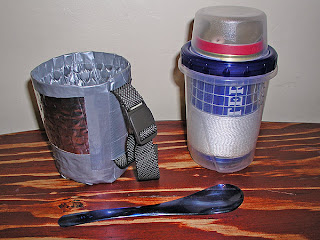 I was pretty busy today but in between jobs I made a pot cozy to fit the Ziplock Pot that holds the Minibull Design 'Gramweenies Kitchen'. The Ziplock container is tapered but I used a program to calculate the size and shape I needed to cut out of the foil sheet. I noticed that even though I've got pretty big hands (size 10-11 gloves) that it was pretty slippery to hold so I made a hand strap from a belt that came with a pair of Columbia trousers. The strap is adjustable so should fit regardless of whether I'm wearing thin/thick/no gloves. I use a GSI long Spoon and it doesn't fit into the Super Pot but I discovered that it can slip behind the hand strap similar to the way the Jetboil Utensils can be stored in the optional PCS Cargo Cozy . I'm quite pleased with the way it worked out. 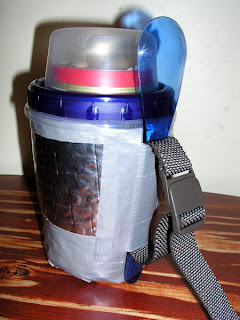 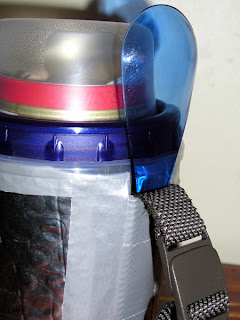 Labels: Cooking, Diy, Gear, Jetboil, Minibull Design
Newer Posts Older Posts Home
Subscribe to: Posts (Atom)
It is in vain to say human beings ought to be satisfied with tranquility: they must have action; and they will make it if they cannot find it. Charlotte Bronte (1816-1855)