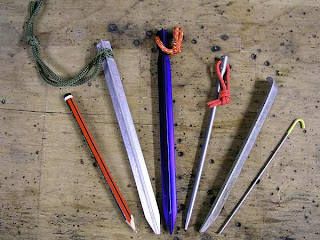 I got my Vargo Nails and ZeRo+ guyline today from team io, top service, they only got the order yesterday as I ordered it really late on Monday night. I bought 4 which together with 4 Camcleat pegs and the standard Laser ti wires should hopefully cover most bases. The ZeRo+ guyline is strange stuff, it's almost wiry, if you coil it it stays coiled. At 1.5mm it's even thinner than the Laser guys but it also comes in 1mm!! must look like thread. The nails look really tough but I've so far resisted the temptation to hammer them into a piece of wood. I'll have to wait until I finish my shift before trying the Laser with the new/extra guys. I also need to make a groundsheet protector from a thick poly bag just to finalise the shape and in case the Coated Ripstop I ordered from Point North doesn't arrive on time. 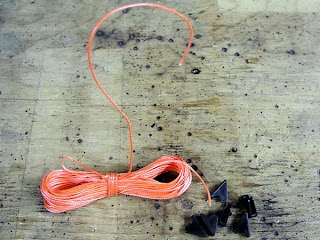 ZeRo+ Dyneema, 1.5mm 195kg b/load
On a slightly different note, I was messing around again with meths burners and I might just have a really light set-up that should work for me. I reckon I can easily get away with about 300ml of water for a main meal which at present is basically a Bacheleors 'Cup Pasta' with some Mrs Matheson's Sausage added (No dehydrator yet) I have a Tibetan ti 450 mug and a poly mug with the handle cut off which fits into the ti mug or onto the base of my Aquagear bottle. My burner is simply the Tealight style burner and 4 section welded ire pot stand that comes with the EK Kombi. It together with a 0.1mm foil windshield fit into a small plastic food container which in turn fits the 450 mug. The whole set weighs 60g, less if I made a mini stuff sack for the burner set rather than the plastic container and takes up virtually no space. I've already tried using it in the Laser porch but with the Mitymug and it worked fine. It's pretty stable and if need be I can put a tent peg through the eyelet in the burner base plate. The burner has a magnet on the base so it doesn't get tipped easily and as i demonstrated in the EK Kombi vid isn't prone to spillage even when lifted and tilted from side to side. Depending on the ambient temp and how well sheltered it is 20ml of meths will heat 500ml until it's too warm to drink even if it isn't strictly speaking a rolling boil. A few more trials need to be done at the weekend. 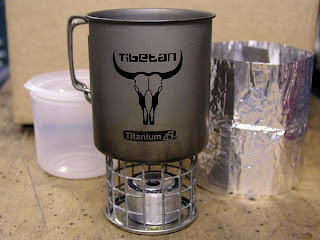 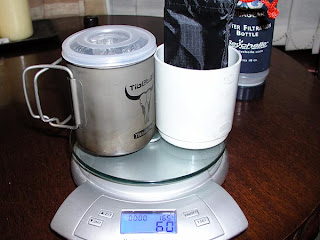 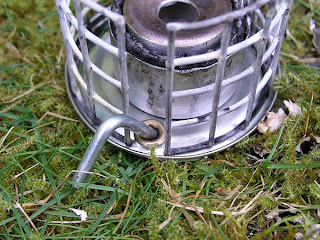 A few post ago I mentioned I was looking for a new tent, the criteria was side entry, dual porches preferred, Geo rather than tunnel, non-mesh inner, around 2kg and less than £250.

So I ordered a Terra Nova Voyager which is of course geo, with a non-mesh inner, but has only one porch, front entry was a little over 2kg and cost £270. Of course when I tried it I thought it was a bit big so..........

I decided to return the Voyager and ordered the Laser instead and it arrived yesterday. I have to say I was surprised at how light it was, 1.25kg or thereabouts, even more surprised by the tent pegs which are small to say the least. A few question on Outdoors Magic forum and I'd been sufficiently reassured so nothing to do but pitch it up. It went up with relative ease, inner and outer together, given that it was a bit windy and I was trying to read the instructions stitched into the stuff sack, keep the stuff sack from blowing away and hold onto the tent all at the same time.

The next thing was to throw in my sleeping bag and try it for size. Very good indeed, loads of space and very easy to move around/get in/get out. It has a good usable porch too with plenty of space to cook even with the fly closed. Of course I had to test it last night, turned in about 1.00am (early for me) made a quick soup drink using the EK Kombi meths back-up as a stand alone stove, had a quick read of TGO by the light of an 'Osram Dot-it' 3 led light. A nice little tent light, very compact and can be used with 3/2/1 LEDs lit. It has a magnetic base so I cobbled together a holder out of a screw on jam jar lid with a piece of para-cord and a bulldog clip. Finally switched off at about 2.00am, slept to about 5.00am then to around 8.00 when I made a quick brew.

There was a fair bit of condensation on the inside of the fly but as it was still and just above freezing I'd expect that, the inner was totally dry. I had the end vents fully closed as I hadn't at that stage figured out how they worked, I'd pegged them down by the shockcord loops.

All in all I'm happy with the tent, there are a few little mods that I want to make, some/most of which I read about at blogpackinglight laser-comp-mods
I ordered some Vargo Nails and a ZeRo +1 Guyline kit from 'team io', I was tempted by the Laser footprint but opted to make my own out of PU coated Ripstop which weighs in at 120g per linear meter. I'd previously ordered some Camcleat 'Y' pegs which also arrived yesterday so together with the Vargo Nails and the supplied ti wire skewers I should be sorted.

I need to pitch/strike it a few more times and get things sorted pretty quickly as I intend to use it not next week but the following in the Cairngorms. 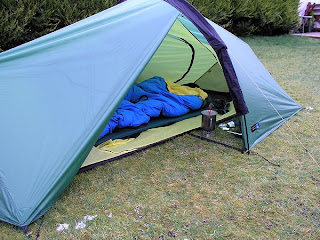 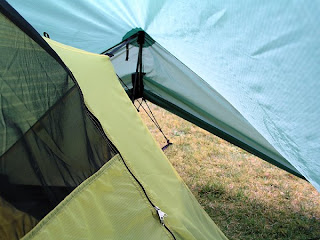 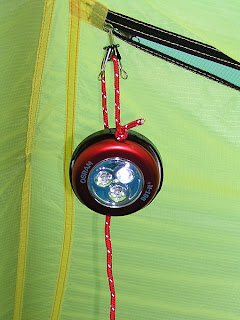 Osram Dot-it Light with screw cap and paracord hanger.
Posted by Mac E at 16:19:00 No comments:

Okay here it is,

You'd think I'd Have learned by Now

Not to research things too much, at least not to the point were I decide that there is one and only one product in the entire world that is suitable.

I always do that and then the product I've decided on is no longer available and I can't accept the alternatives as I've already convinced myself they aren't what I want. It's happened again and this time to rub salt in the wound I had 2 opportunities to get the item in a sale.

In this case it's a tent, I have an F10 Nitro and while it's fine I wanted something a bit bigger for the winter. I decided late last year that a Jack Wolfskin Termite 2 was exactly what I wanted, pretty much the same weight as the F10 but 2 person with two side porches and a bit more roomy. Cotswold had it in the sale last year but it didn't suit me to get it at that time, then it went back up to full rrp. Last month it appeared again in the Cotswold sale, I figured I had time, put it off and guess what.........
.......... no longer stocked, not by Cotswold, not bt Jack Wolfskin themselves, in fact it isn't even listed in the catalogue.

I wouldn't be hard to convince that the only reason they dropped it from the line-up was because I'd decided it was the only tent that suited me.

So back to square one, criteria? side entry, dual porches preferred, Geo rather than tunnel, non-mesh inner, around 2kg and less than £250.

Half Way Round the World!!

I sold 2 of my stoves to a guy in Japan mid February, have to admit I was surprised to get an order from the other side of the world. He featured them on his Blog and since them I've sent another 3 to Japan. The 1st 2 Kombi's are going to him tomorrow, before they hit the store. I guess you could say a Stovebuilder is not without honour save in his own country.

This is the stove I've been working on for the past few weeks. I tried it out in Alcohol configuration on my failed snowboard project and it worked well. the video shows the stove set up as a base/windshield for both alcohol stoves and soild fuel tablets. 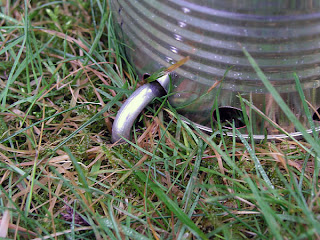 I was curious to know how stable my Mitymug sized woodstoves would be given the fairly small footprint, the EK750 is pretty short but the new model I've been working on is a bit taller so stability on uneven ground was likely to be a concern. I've previously used the old "tent peg through an air vent trick" but wondered what I could do if I couldn't get a peg in on rocky terrain. I came up with this, 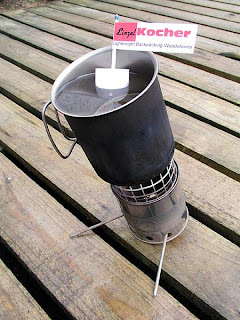 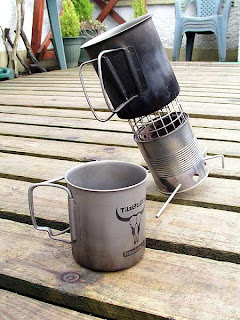 I reckon that if you need more stability than that you're going to need a hanging stove.
Posted by Mac E at 15:38:00 No comments:

Labels: Alpkit Mitymug, Cooking, Einzel Kocher, Tibetan Titanium
Newer Posts Older Posts Home
Subscribe to: Posts (Atom)
It is in vain to say human beings ought to be satisfied with tranquility: they must have action; and they will make it if they cannot find it. Charlotte Bronte (1816-1855)