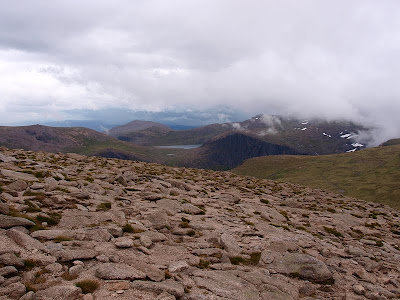 I was over in Scotland in July for a week car camping with the family but did manage a couple of day walks. The 1st was a walk around the northern corries starting from the ski center at Glenmore in the Cairngorms. We were camped at the campsite in Glenmore so with I set off leaving wife, daughter and niece who were intending visiting the Reindeer center and so on. 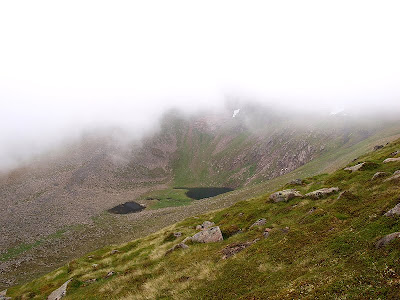 It had been showery the previous day since leaving Braemar and although it was fine when I left the car park at the ski center it didn't look like it would be a rain free day. I simply followed the path that crosses below the northern corries and by the time I'd reached Coire nan Lochain I was down to a t-shirt. The cloud kept rolling in though and by the time I was heading up between Coire nan lochain and Lurchers Crag the wind picked up a little and the 1st drops of rain appeared. At this point there was no indication of how long the rain would last so I pulled on my waterproofs, Marmot Essence jacket and TNF Resolve over-trousers (recieved from Webtogs for review)

As I reached the plateau with Coire nan Lochain to my left visibility was poor although the cloud did tend to lighten/thicken continually. I hadn't gone far along the path when I saw in the distance what looked like a herd of reindeer. They were pretty far away and weren't in a direct line with where I was going so I continued on towards the point where I'd turn and head towards the high point on Coire nan Lochain. 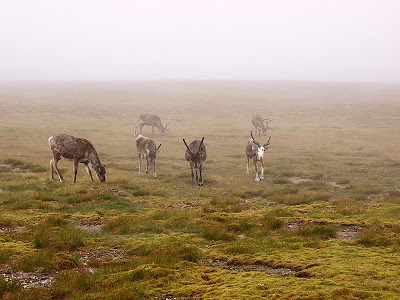 The rain eventually stopped and the sun started to break through and as visibility improved I saw another herd of reindeer, I say another but it may well have been the same herd I'd seen earlier that had simply moved up the steeper western slopes of Coire nan Lochain whereas I'd taken the longer less steep approach. 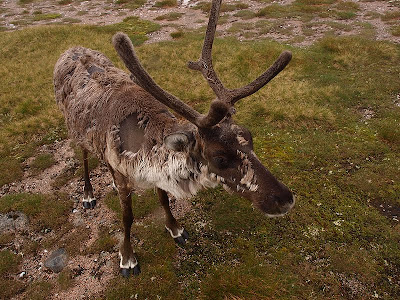 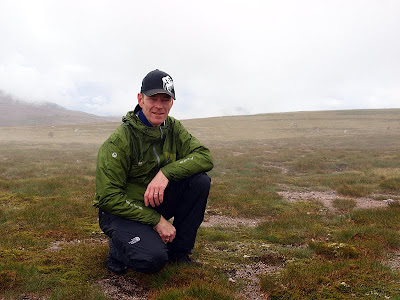 Although they weren't directly between me and the cairn they started to walk in my direction. I was pretty sure that they weren't going to be a problem so I kept on going and they kept on coming until they were right beside me, within touching distance. I'm sure they're used to humans but even so it was a real buzz to be alone on the hill with a herd of reindeer. There were a few calves with them and although they were quite comfortable while I took some photographs something, perhaps I made a sudden movement, spooked them and they raced off although they didn't go far. 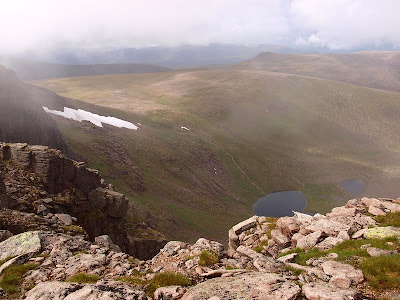 Once I'd reached the cairn on Coire nan Lochain I continued arourd the rim of the corrie towards Coire An'Sneachta. The weather was fine now although there was still a stiff breeze in places so i removed my fleece (Mountain Hardwear 100wt Full Zip) but wore the Marmot Essence as a wind shirt, I've found the Marmot Essence to be breathable enough that I don't carry an actual windshirt anymore. The views towards Ben MacDui and Loch Etchacan were fantastic especially as the cloud kept drifting around and as I reached the Fiacall a Coire Cas I stopped for lunch. Taking in the views it would have been nice to have stayed out overnight but it wasn't to be this time. 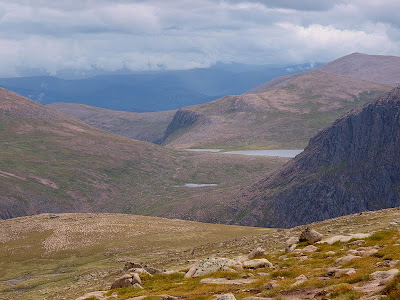 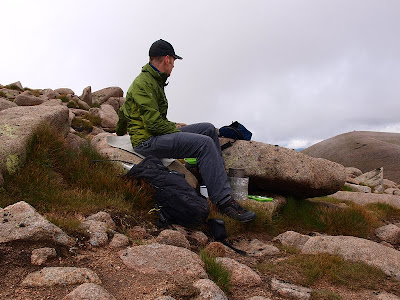 Having re-fuelled I continued on up to the top of Cairngorm before decending to the Ptarmigan resturant where I was able to go in for a mug of coffee. Although all the equipment that comes with Cairngorm being a ski center is a bit of an eyesore it doesn't bother me too much, the reality is that there's enough space for everyone, same for the mtb/downhill ski stuff at Aonach Mor. That said I'll be hypocritical and say I'm glad that they didn't manage to expand the ski center into the northern corries as was suggested a few years ago. 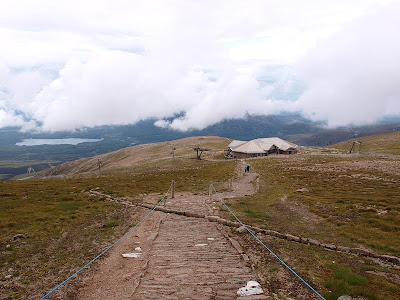 Having left the Ptarmigan I continued to the car park by way of the 'Windy Ridge' walk. Apart from the rain I'd had on the way up to the plateau at the start it'd been dry all day but as I was getting myself organised at the ski center the rain started and it was really heavy on the way back to the campsite. As it turned out the others had been stuck in the tent all day as it had started raining shortly after I'd left.

Newer Posts Older Posts Home
Subscribe to: Posts (Atom)
It is in vain to say human beings ought to be satisfied with tranquility: they must have action; and they will make it if they cannot find it. Charlotte Bronte (1816-1855)