I mention in my previous post that I'm increasingly impressed by my Uniqlo down jacket, the service is good too as I'd ordered a down Parka at the same time as the down jacket but had returned it and everything went smoothly. I needed some ordinary clothing and thought I take a look at Uniqlo but while I was browsing I found some other stuff that looks like it could be used for backpacking etc.

Apart from the lightweight down stuff (Parka, Jacket and Vest) I found some light trousers that look like they would be useful around camp or as sleepwear.

There's also a range of fleece tops but this one caught my eye,

There's also the Heattech baselayer range and of course fleece tops in a variety of weights/colours.

I'm considering ordering the Fleece sports hoodie and a pair of the Warm Easy cargo trousers just to see what they're like but I'd be interested in hearing the views of others on the potential of some of this.
Posted by Mac E at 13:56:00 6 comments: 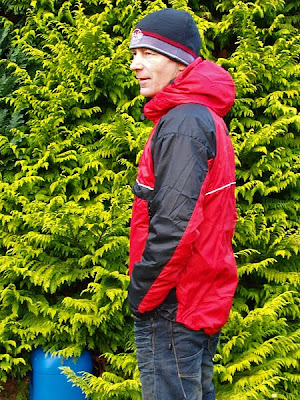 I seem to be making a few purchases recently that I didn't expect to be making and haven't bought the things I'd intended to buy. I bought the Uniqlo down jacket on a whim and I've been really pleased with it, in fact it just keeps impressing me more and more. I'd been considering a pertex-pile smock/shirt to use primarily for canoeing but having been reading some posts by Robin (Blogpackinglight) and Maz (The Journeyman Traveller) Paramo started to attract my attention.

I've never really considered Paramo, I've read the threads on Outdoors Magic and looked at Paramo briefly in shops but to be honest thought it too expensive. There doesn't appear to be any middle ground where Paramo is concerned, it seems to be very much a case of love it or loath it. There's a similar degree of entrenched opinion when it comes to Gore-Tex v's eVent although in my experience there's little difference in reality and I'd make my choice on fit/features rather than the fabric.

The one Paramo item that really made me loook more closely was the Velez Adventure Light (VAL) To me it looked similar in cut/style to a Buffalo Pertex-Pile Mountain Shirt (and the various clones/variations from Snugpak/Montane/Extreme Outdoor gear) but without the bulk. It seems like a coincidence but there were also a few Paramo releated threads recently started on Outdoors Magic and one that was of particular interest was about what to wear under the Velez smock.

The Velez AL retails around £200 which was more than I wanted to pay but searching ebay I found the Paramo Extras shop who had the VAL on sale at £135 including postage and also available as a 'Best Offer' buy. I was a bit unsure about sizing as I'd read that Paramo was a bit strange but checking the size chart on the Paramo website it looked like I needed a Small. I ended up going for a Small in Fire/Black and made an offer of £120 which was accepted. I was still a bit concerned about sleeve length as I find some brands are too short but figured that I could always return it if it didn't fit properly.

Postage was free but I was able to upgrade to 24hr Special Delivery for £1.50 and being impatient that suited me fine. The VAL arrived yesterday so as soon as I came home from work the package was opened and the smock tried for size. 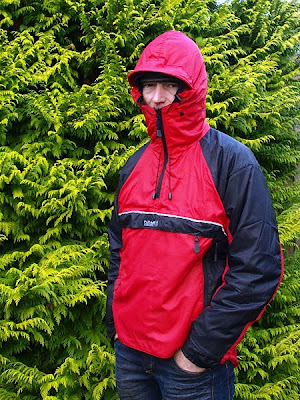 I'd almost managed to convince myself that it wouldn't fit but I'm pleased to say it's perfect, the sleeves are long enough and it's not too loose worn with a base layer yet I can easily wear my Montane Flux underneath it, the icing on the cake is the hood, just the type I like with a drawcord which goes all the way around and doesn't resemble a flat cap like the one on my Montane Venture. 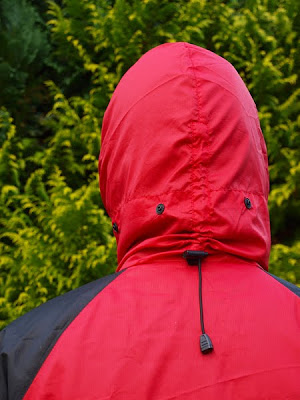 As yet I haven't been able to test how waterproof it is, some people report that it's as good as Gore-Tex/eVent, others say it leaks so time will tell. It's hard to believe that it's as waterproof as a hardshell as it's so soft, it really is comfortable and I've been wearing it all day. 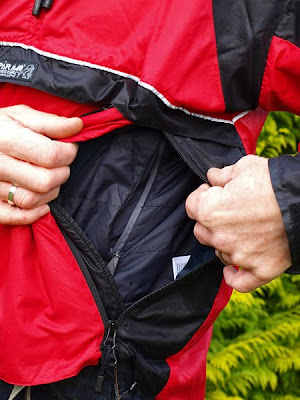 I don't think I'll find it too warm but if I do it's easily vented by opening the side zips which open from about chest to waist level. There's a spacious chest pocket and also 2 internal hand warmer pockets, unfortunately to access the hand warmer pockets you need to open the side zips, maybe it has to be done this way due to the way the inner/outer fabric works?

With regard to the waterproofing I'm not too concerned as had i not bought it I'd have gone for a Pertex-Pile smock which isn't waterproof anyway, the worst case scenario in my opinion is that even if it isn't as waterproof as a hard shell it's still a really soft, flexible and not bulky soft shell that should dry quickly and for my intended use it'll be perfect I think. If however it keeps me as dry/comfortable as my regular waterproof jackets I may well be a Paramo convert.

Did I mention I'm absolutely delighted with it? :-) 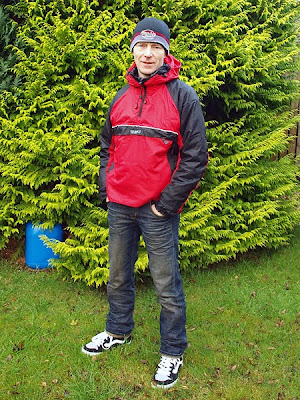 Make Your own Down Hood.

I found this blog as the writer had posted on OM on a thread about making a Down Hood, Rob (the writer) has also made a quilt and it looks very nice. If you fancy trying your hand at making a nice down hood have a look at Rob's nicely illustrated step by step. 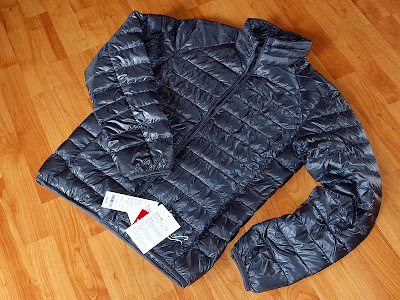 I just received a new down jacket today, I hadn't actually intended buying any more down gear as I figured I was already sorted but I found this thanks to a post on Outdoors Magic. The reason I decided to go for it was cost/weight and intended use. I bought a PHD Minim Ultra sleeping bag earlier this year to use as a summer bag, it wasn't new as I simply couldn't have justified the cost but I've been using it since I got it. It's really light at 364g (advertised weight is 345g) and surprisingly warm although I always have the option of adding my PHD Ultra Down vest (150g) if needed. The only downside is that the vest has no sleeves (obviously) and what I really should have bought was the PHD Ultra Down Pullover or the Mont-Bell UL Down inner jacket. Unfortunately I'd already bought the vest. 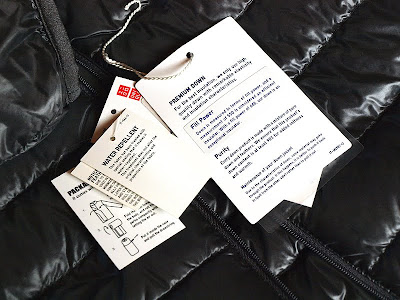 Given that I wanted something lightweight as extra insulation to wear in camp or to upgrade my sleeping bag if required a 210g down jacket at £49 seemed worth a shot. The jacket is from Japanese fashion brand Uniqlo and is a very simple design, 2 zipped handwarmer pockets, 2 deep inside pockets, lycra bound cuffs and a stand-up collar. 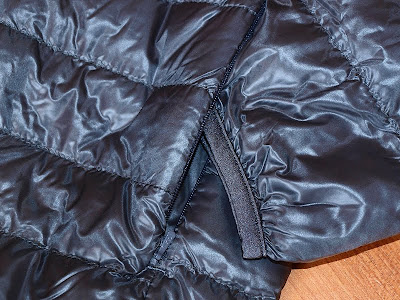 The down is 640FP but there's no mention of whether thats US or EU, the down/feather ratio is 90/10 but theres no mention of fill weight, at 210g there won't be much, finally the shell has been treated to make it water repellant. I was very tempted to go for the green jacket but in the end decided on the more subdued grey. 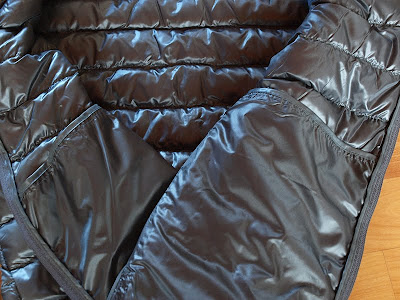 There's no doubt that this jacket isn't even close to being in the same league as the 230g PHD Ultra Pullover with 900 EU fill power down or the 195g Mont-Bell UL down inner jacket with 800 (US?) fill power down, obviously you get what you pay for and if I'd had £200 odd to spend I'd have gone for the PHD. 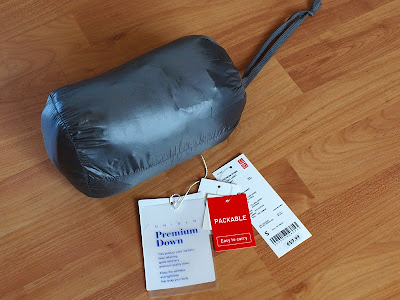 The jacket packs down very small into the supplied stuff sack and could compress even further to half the packed size. I find the fit is good, I went for small as I'll probably only wear it over a baselayer or thin fleece but the sleeves are nice and long which is good in my case and it feels warm enough. I'm not sure whether I'd actually recommend it especially when talking about PHD and Mont-Bell although as summer only extra insulation I guess it should do the job, interestingly when I checked the price after mine had shipped it was back up to £59 although someone on Outdoors Magic mentioned that at one point it was on sale at £29 and at that price it really would be hard to pass up. 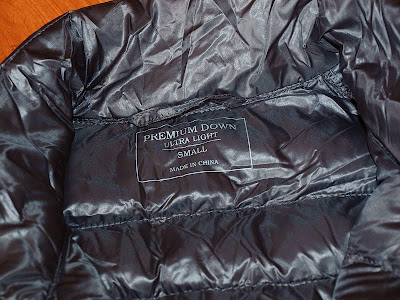 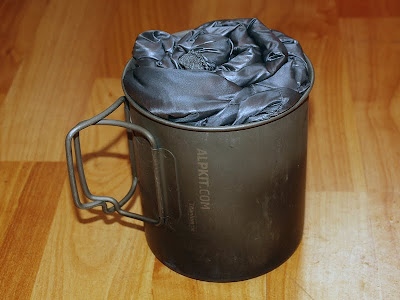 Labels: Down Gear, Insulation, Sleeping System, Uniqlo
Newer Posts Older Posts Home
Subscribe to: Posts (Atom)
It is in vain to say human beings ought to be satisfied with tranquility: they must have action; and they will make it if they cannot find it. Charlotte Bronte (1816-1855)