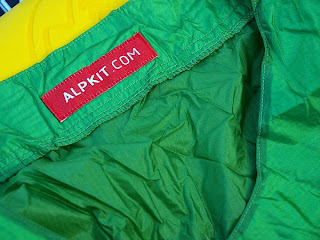 I mentioned a few days ago that I was expecting delivery of an alternative to a regular sleeping bag and that it wasn't a quilt, well it arrived yesterday and what it is, is a Pied d'Elephant. Just in case you don't know what that is it's the bottom half of a sleeping bag, the idea being that you use a duvet jacket to make up the top half.

If I remember correctly the first place I saw a Pied d'Elephant mentioned was in the book 'I Choose to Climb' by Chris Bonnington and searching for such a thing about a year ago was how I found Alpkit. I'm not sure why they never featured in any mail order catalogue I ever had, I guess there simply wasn't any demand but I assume they must still be popular in Europe. I learned only today that OMM made one so there you go.

So why did I decide to give it a try? well one reason is that I wanted to see if I could reduce my pack weight, I always carry some form of insulated jacket or vest, in summer a PHD Ultra vest, for colder weather either an ME Xero or an Alpkit Filo. It seemed logical to make more use of them than simply as an extra layer when sitting around and in the process I could potentially halve the weight of my sleeping bag. The other attraction was that I could cook with both arms free while still retaining warmth, I was sold on the idea thanks to a bivvy just over 1 year ago when I used a German Army sleeping bag that had sleeves and a waterproof cover also with sleeves. I was fairly confidant that if I could sleep out in temperatures just below freezing in a thin quilted synthetic bag under a poncho (albeit fully clothed) then I'd manage ok in a down filled version using a bivvy bag under the fly of my tent.

Of course I toyed with the idea but kept putting if off until last week when I decided to bite the bullet and order one. 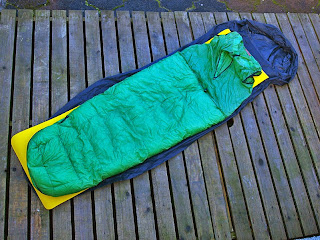 The PD200 is a nicely finished bag and the down feels similar to that of the ME Xero but not as soft as the Minim 500. There's a zip running across the end where your feet are but there's no baffle which I was slightly concerned about. The top half is simply a thin vest affair with a zip and there's an elastic drawcord at or around waist level. The construction is different to the other 2 bags, instead of full width channels running across the bag it has a center section of horizontal baffles with vertical channels running down each side, the construction is the same back and front but whether the channels are closed to prevent down migration or not I couldn't say. The bag came supplied with a large storage sack, a small stuff sack and a compression stuff sack but I've opted to use a 4L Sea to Summit Ultrasil drybag which only weighs 29g. The bag lofted up nicely once unpacked and everything I've seen so far would encourage me to buy a regular Pipedream, the PD800 looking good as a winter bag and at a very good price. 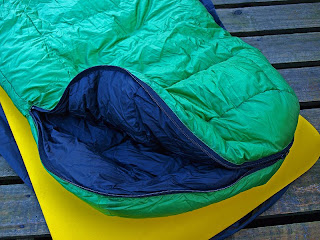 Foot Zip without Baffle, The Channel Construction can just be seen

The proof of the pudding is the eating and I wanted to try it out as soon as possible so set up the Phreeranger Fly/Footprint yesterday evening. The Fly I'm using isn't my best one and obviously needs the seams re-sealed but I was going to use the previously tried Trekmates bivvy so a few drips weren't going to be an issue. I could have chosen a Self Inflate mat but in order to test the PD 200 I used a Millets (Eurohike) 4 season CCF mat. 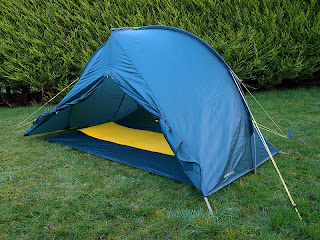 With the Fly pitched and sleeping mat sorted I had to decide on which jacket to use. At this time of year I'd be using either the ME Xero duvet jacket or the Alpkit Filo but decided to risk using the PHD Ultra Vest with the option of swapping to the Xero jacket if I was feeling too cold. The temperature at midnight was around +5 deg but it was raining and there was a creeping dampness that always makes me feel colder. I settled in, initially wearing only a fleece and thin synthetic base layer with my lower half in the PD 200. I made something warm to eat and drink and was pleasantly surprised by how warm my legs and feet were. Once I'd finished eating I removed the fleece and put on the Ultra vest and settled down for the night. Unfortunately or should that be predictably the down vest wasn't enough, my body was ok but with only a baselayer between my arms and the bivvy bag I began to feel uncomfortable. I could have added the fleece but instead switched the Ultra vest for the Xero jacket. The Xero jacket doesn't have a hood but I wore a hat and in addition wore a pair of fleece gloves. With the Xero on I soon returned to a comfortable temperature although my lower half was comfortably warm at all times and the lack of a baffle on the foot zip didn't have a detrimental effect. The wind picked up and shortly after the rain stopped and the sky must have cleared as the temperature had dropped down to +2 deg when I awoke feeling hungry at 6.30am. This was my opportunity to really benefit from what is effectively a sleeping bag with sleeves, the stove was fueled, the pot filled and a hot mug of drinking chocolate was steaming away without any draft inducing contortions caused by trying to get arms out of a sleeping bag. 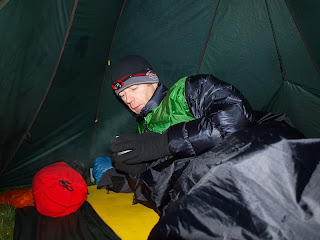 I wore the PD 200 vest part over my jacket, that way I can ditch the sleeping bag without taking my jacket off.

I decided to open the porch door and tied it back before settling back down for another kip but by this time people were setting off for work, next door the oil heating switched on (most annoying) and I only dozed until about 8.30 when I decided to pack it up. 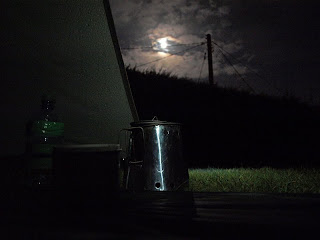 The verdict then, well it worked, with a jacket I was fine, the PD200 worked a treat as did the Trekmates bivvy and I certainly like having the use of my arms. Like for like I suspect it's not going to be as warm as a regular sleeping bag for a variety of reasons not least because the jackets are all stitch-through, against that it's a closer fit. In the event that the temperature had dropped further and I had to use what was available I could have added my fleece. There is some weight/space saving although it isn't much, only 200g over the Xero 250 but again it's warmer than the Xero 250, there's about 400g between the PD 200 and PHD Minim 500, the Minim should be warmer but some of the benefit is lost for me as it's really too big, I'd be better with a 'Slim' PHD bag suitable for up to 36" chest (I'm about 37" in a baselayer) rather than 'Regular' which is suitable for up to 44".

I intend to use the PD 200 for real maybe next weekend or at least before Christmas, again I'll probably use the Phreeranger in Single Skin mode but that depends on what the weather conditions are like. The packed size of the Phreeranger used in Single Skin configuration is pretty compact and thats always an attraction, I don't want to sacrifice comfort or safety though.

What I'd really like to see is a sleeping bag/Duvet Jacket/Sleeved Bivvy combo with all parts designed to work together but it's doubtful if there's a market for it. 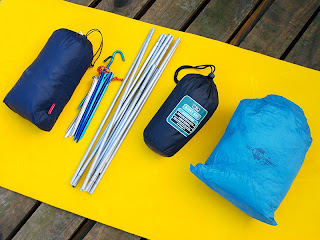