I tried the Power Lizard in the garden last night to see how it fared with regards to condensation, I’ll freely admit that testing a tent in the garden is akin to sleeping in your centrally heated lounge and claiming that your new sleeping bag rated to -30°c was worth every penny, that said there’s no way I’d take to the hills in an un-tried tent.

There aren’t any surprises regarding the tent to be honest and in use it’s so similar to the Laser I had last year that you’d be hard pressed to say one is better than the other unless you need the extra length of the Power Lizard. Of course while the extra length may be beneficial if you're over 6' you don't benefit from a similar increase in height so you'll be sitting crouched even at the apex. The extra length comes at the cost of under fly storage space as there's no space at the ends.

When I wakened up this morning there was plenty of condensation on the inside of the fly, the temperature last night outside was around 13°c, inside the inner tent it was around 18°c but there was a slight breeze all night. I noticed some condensation on the inner at the head end on the side away from the porch and there were also a fair few droplets where the condensation was shaken off the fly sheet. The headroom is less than I’m used to and sitting up meant leaning forward until I was at the apex before actually sitting up, trying to sit up from a lying position meant my head was in continual contact with the inner which resulted in contact between inner and fly. Checking the tent over once outside it was easy to see where the inner had touched the fly either due to the way the fly flaps about or due to me not being careful enough while inside. Maz mentioned being unable to tension the inner at floor level across the head end and there's a good reason for that, the inner is too wide. 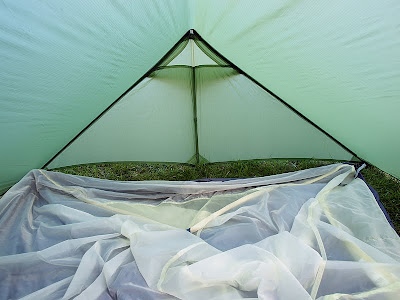 Inner Tent Attached at the Head End,
The Webbing Strap is fully Tightened but the inner is still Loose.

The porch side attachment webbing is adjustable as I mentioned while the opposite side is fixed but even with the adjustable webbbing fully tightened the fly is still loose, in the middle where it attaches to the webbing connecting the ends of the main pole it's much too tight and for some reason the inner tends to get pulled away from the porch side and is a bit to close to the fly for my liking. 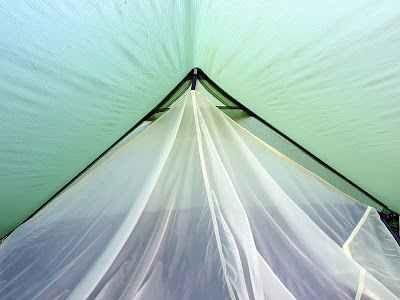 Inner Attached, With the Webbing Fully Tightened To Pull It Towards the Porch It Still gets pulled Away from the Porch


As I wasn’t entirely happy with the way I’d pitched the Power Lizard, especially the length of time I was taking to get it pitched and tensioned to my satisfaction I had a few more attempts today. In the end though it still takes me a good 8 minutes to unpack, pitch and fine tune with the inner attached. I shot a video to illustrate what I mean and while I feel the pitch was acceptable I still ended up adjusting it a few times more before I was reasonably satisfied, I‘m sure I could spend all day adjusting it and still not be 100% satisfied. It’s fair to say that if I can’t get it pitched to my satisfaction in a reasonable time in my own garden it’s extremely unlikely I’ll enjoy pitching it in less favourable circumstances.

I’m going to perserverve for a while and I’ll continue to practice pitching to see if things improve. The irony is that one reason for selling the Laser was the fixed inner and one plus point with regards to the Power Lizard was the removable inner but as it takes me so long to pitch it I’ll probably just keep the inner attached.
Posted by Mac E at 22:39:00