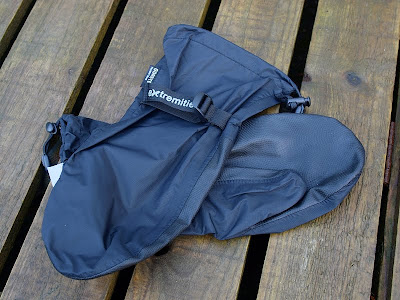 I prefer shell Gloves/Mitts to those that are lined, of the lined gloves I have all get wet through and then take ages to dry and taking them off means you lose all the protection in one go. I have a pair of Marmot shell gloves which are reasonably good but they're a bit too tight with anything more than a basic fleece liner. I bought them last year from ULOG but couldn't get XL as they were in the sale so went for L instead. It seems they aren't made anymore unfortunately.

In my opinion the reason you don't often get breathable shell gloves is the difficulty of taping the seams, most if not all Gore-Tex/eVent gloves are 3 part. there's a plain nylon outer glove, then a liner made from a waterproof breathable fabric which in many cases isn't seam taped and then a thin fleece liner. There are some shell mitts made from waterproof breathable fabric and I'd put that down to it being easier to tape the seams on mitts.

I've looked at both the Extremities Tuff Bags (Gore-Tex) and the MLD eVent mitts. The MLD mitts are incredibly light at 35g/Pair Large but aren't seam sealed, instruction for sealing them youself using silicone sealer are given on the website. The MLD mitts are a very simple design and appear to only have one drawcord at the cuff but as a simple waterproof shell look like they'd work well.

The Extremities mitts aren't quite as basic, they have taped seams, a shockcord and captive cordlock at the cuff and also a webbing strap and buckle at the wrist, they weight 75g size large. In the end though I decided on the Tuff Bags as they were available without needing to wait and Field & Trek had themn reduced to £32.

I ordered the Tuff Bags in Large, having tried them on in the past I knew they'd fit ok. They feel really light but could have been (or could be with a little modification) even lighter. The shockcord used at the cuff is 3mm and has an nice plastic end cap thing but if you were really keen you could replace it with 2mm and use a mini cordlock, in fact it might be worthwhile swapping to a lighter shockcord anyway as the fitted stuff puts quite a bit of stress on the fabric. The cuff strap at 20mm seems overkill for such a light mitt considering it needs a 20mm buckle and combined with the cuff shockcord must make up a fair percentage of the total weight of the actual mitt, again if you were seriously keen to lose a few grams you could remove it completely or cut it off leaveing just enough to stitch on a lighter strap/buckle or shockcord/cordlock. 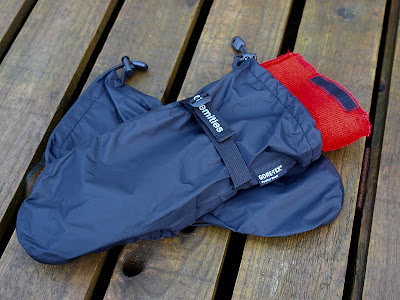 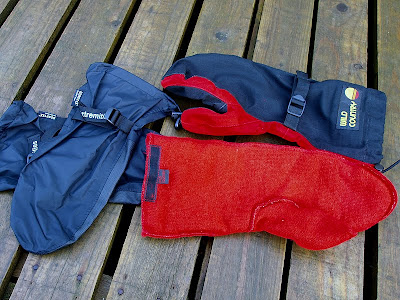 I don't have a liner sorted yet apart from my normal fleece gloves. I have a pair of Wild Country Extreme mitts from way back, they have a heavy stiff Gore-Tex shell and a removable fleece liner and I considered using the liner with the Tuff Bags but it's a bit too long. I do however have a pair of Wintergear mitts of a similar design, they're made from a lighter coated breathable fabric with a removeable fleece liner. I haven't been able to try them though as they're in my mum's attic. Failing that I may go for a pair of Buffalo Pertex/Pile mitts and only add the Tuff Bags when I really need them.
Posted by Mac E at 20:22:00