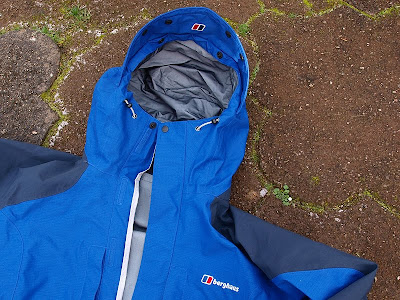 I've been looking for a new shell jacket for quite some time but found it difficult to get something that met the design criteria that I had in mind. To be honest the criteria wasn't anything unusual or at least that's what I thought.

I wanted a decent wired hood that wasn't cut away at the sides, something like my old Phoenix Gore-Tex jacket or the Paramo VAL, I wanted a standard zip and double external stormflap rather than a waterproof zip, I also wanted at least one map sized pocket accessible behind the stormflap or at least accessible without needing to open the main zip, I wanted a waist drawcord and finally I wanted self fabric cuff tabs rather than rubber tabs. I didn't really care whether it was eVent or Gore-Tex as I didn't notice much difference in breathability with my eVent Montane Venture over my Gore-Tex jacket. The Venture isn't a bad jacket but I really disliked the hood to the extent that I've only worn it about half a dozen times.

I've had good results with Mountain Equipment clothing and quite liked the look of the Morpheus although I was doubful about whether I'd like the hood in spite of it being highly rated. I was browsing the Field & Trek website and noticed that the Morpheus was on sale so decided to order one, being unsure of the size I checked Mountain Equipments website and decided on small.

I really liked the Morpheus, the design was clean and the fit was good, it ticked most of the boxes having an external map pocket, a waist drawcord, standard zip and external stormflap and self fabric cuff tabs but unfortunately the hood let it down. I felt that the hood was too small, too cut away at the sides and the collar didn't go up quite high enough. I wondered if a medium would be better but couldn't get a Medium Morpheus in the sale so decided to try the Mountain Equipment Ogre which was reduced. I ordered a medium but it felt too big and the hood still didn't feel right so it went back, it's possible that a Small Ogre might have worked as I think the hood is slightly different to the Morpheus but at £190 I needed to be 100% satisfied so decided not to take a chance.

I looked at as many different brands as I could think of and couldn't find anything so asked on Outdoors Magic for suggestions, eventually someone suggested the Berghaus Pro Trek and for want of any better suggestions I ordered one from Outdoor Action in size medium, price £140.

I'd tried a Berghaus jacket earlier in the year in one of those shops that sells end of line clothing, I think the jacket was the Dunedin and I'd liked the general fit and the style of the hood so I was reasonably confidant that the Pro Trek would be the one. The jacket duly arrived and after trying it with a variety of midlayers I decided to keep it. It doesn't tick all the boxes but I've had to compromise as the hood is right and that's the major thing for me. 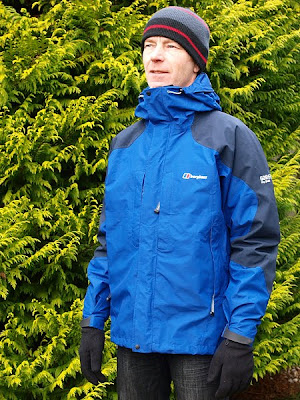 Not a Slim Fit Jacket but I can easily get a down jacket underneath.

The Pro Trek is made using 3 layer Gore-Tex Pro Shell and is a bit heavier than my Montane Venture at 600g, it has a standard front zip with an external double stormflap, the flap closes with small velcro strips set at intervals rather than a full length velcro strip on the Morpheus, I think I prefer the small strips as velcro is a bit of a pain generally as it tends to catch up on everything else, to be honest I can't see why they don't just use studs to secure the stormflap. It has 2 handwarmer type pockets which use waterproof type zips but also have a little stormflap, there are 2 chest pockets capable of holding a map, like the other pockets they have waterproof zips/stormflaps. Finally there's a zipped mesh inside pocket. 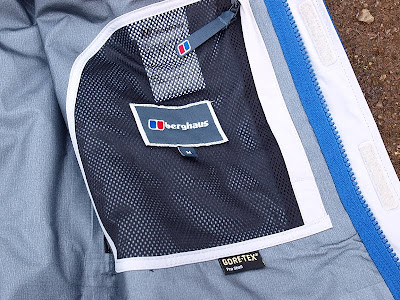 The hood drawcord is elastic and the ends of the cord are kept out of the way behind the stormflap but the cordlocks are much too small, it's difficult to release them with bare hands and virtually impossible with gloves. 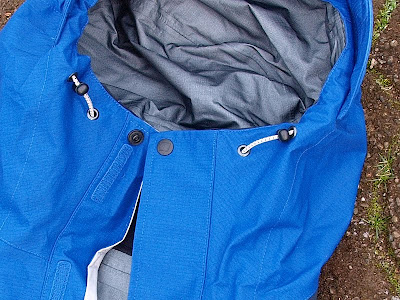 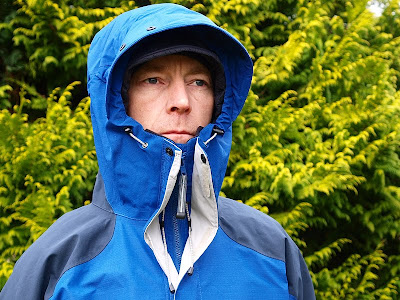 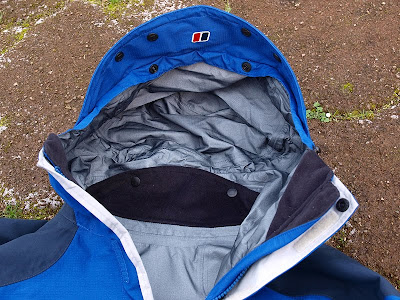 I intend to replace them with side release cordlocks from Shelby in Finland which are similar to the ones on a Montane Flux .

The jacket also features pit-zips, how much advantage they'll be I've yet to find out, given a choice I'd probably do without as it's one more thing to go wrong, in any case the zips are the waterproof type and again have a small stormflap. 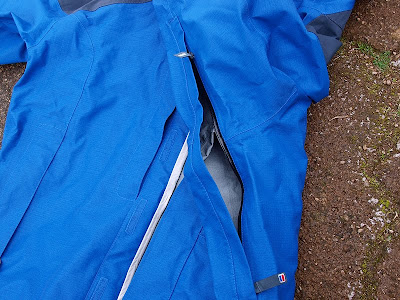 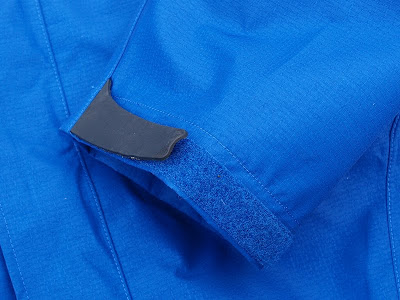 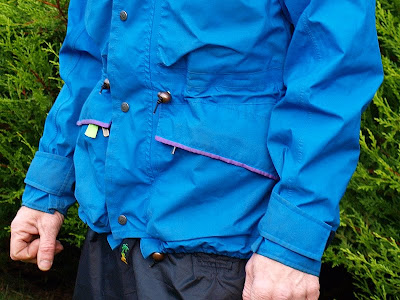 There isn't a waist drawcord unfortunately but that's one of the compromises I decided to accept to get the type of hood I wanted. The other compromise is the cuff tabs, they're the rubber type and to be honest I just don't see what advantage they offer over self fabric tabs, they're stiff, don't want to lie flat and tend to catch on gloves, pockets and so on, I'm seriously considering cutting them off and sewing on a plain velcro tab. I'd class the cut as full which is exactly what I wanted as it needs to work with a variety of midlayers, I didn't want a slim fit as I already have a close fitting waterproof for using outside of winter. 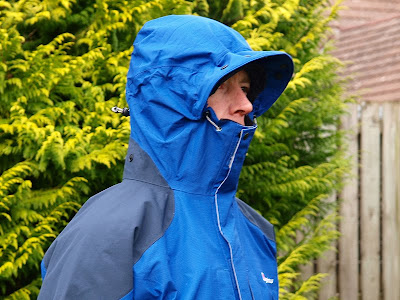 Ample Protection on the Hill, Less Stylish on the High Street 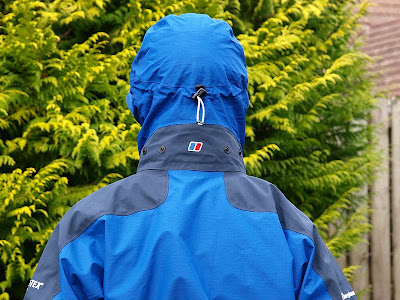 The Hood, well the hood was always going to be the deal breaker, thankfully the hood on the Pro Trek is a full on mountain hood that should protect from wind driven rain/sleet/hail, the drawcord goes all the way around so it actually tightens around my face rather than simply pulling the hood down (or the shoulders up) like my Montane Venture. The peak/visor has a decent wire stiffener and has a volume reducer that is pretty similar to the Mountain Equipment design, and when zipped up the collar comes right up to nose level comfortably. 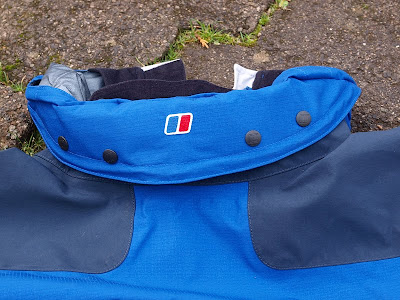 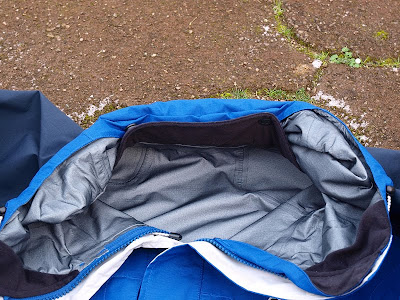 There's only one aspect of hood that I don't like or at least don't see the benefit of. The hood can be rolled away and secured with plastic press studs but to be honest the wire stiffener makes it a rather stiff and uncomfortable collar, it's much more comfortable to just have the hood hanging loose and in any case you'd need to remove the jacket to roll and secure the hood. To be honest I think it's a case of having an extra feature for it's own sake and like the rubber cuff tabs it adds little if anything to a jacket that would function just the same without it. Ironically the studs used to secure the hood could have been used to secure the stormflap, that in my opinion would have improved the jacket. 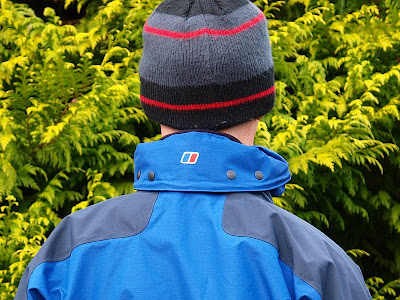 Hood Worn Rolled, It's Quite Stiff and Uncomfortable due to the Wire Stiffener 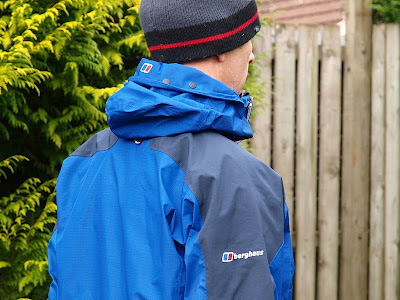 Hood Worn Loose with the Peak/Visor turned down, I find it more comfortable this way

That said I like the jacket and while it's yet to be tried in the conditions it was bought for it should be tested quite soon given the weather reports.
Posted by Mac E at 18:30:00