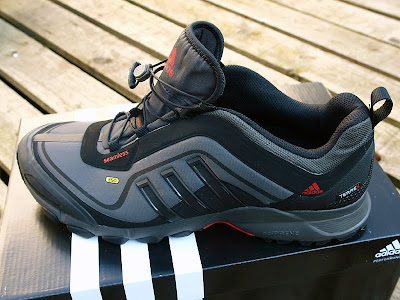 I received a pair of Adidas Terrex Seamless trainers from Webtogs recently, I'd had a choice of TNF Hedgehogs, Keen Alamosa but choose the Terrex Seamless for a variety of reasons. Although popular, Gore-Tex (or eVent) lined shoes aren't a favourite of mine, I find them ok on tracks/paths but on sofer ground or long wet grass you inevitably end up with wet feet as shoes being shoes aren't high enough and once they get wet inside they take a while to dry, on that basis I ruled out the TNF Hedgehogs.

I ideally wanted something that I could use when canoeing as well as walking so ultimately choose the Terrex Seamless as the lack of stitching and close woven fabric looked like it would be more splash resistant and less likely to retain mud etc than the more open fabric on the Keen Alamosa, additionally I liked the lacing system as it looked less likely to get caught up on the seat etc fittings in the canoe. Gareth at Webtogs advised me that Adidas can be a bit small fitting so I tried a few pairs of Adidas sports trainers locally to check and sure enough size 9's which are my normal shoe/boot size were a litle tight so I asked for size 10. The shoes duly arrived and the 1st pleasant surprise was the weight or lack of, prior to opening the box I could have easily been convinced that there was only one shoe inside, fortunately both shoes were present. 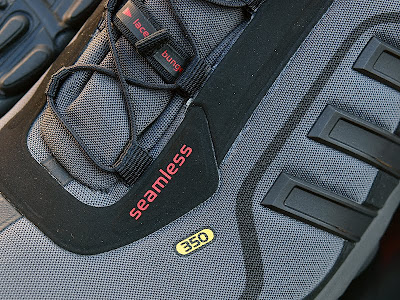 The shoes are marketed as 'Seamless' and although I didn't go over them with a fine tooth comb the visible joins are indeed stitch free. The fabric is quite closely woven and looks quite similar to wetsuit faric (neoprene with a face fabric) but of course it feels quite different. I'm not sure how the joins are achieved, I suspect they're bonded so there may be a question mark over long term durability. When it comes to fit everyone is different, I find I'm pretty tolerant when it comes to footwear so the Adidas are fine, the only thing is that I need to compromise slightly as if needed I wear Gore-Tex socks. With that in mind the Terrex do need to be laced tightly when I'm not wearing Gore-Tex socks and it's worth considering that the lacing doesn't extend down the toe as far as on some other trainers. 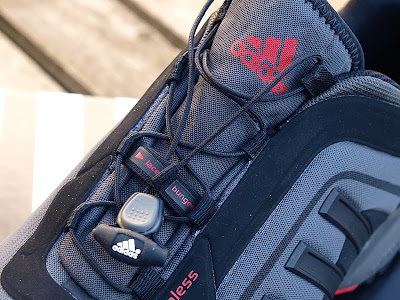 I mentioned the lacing system, I'm sure there's a name for it but it escapes me, suffice to say that it consists of a very fine cord which is locked by a cordlock and I imagine it'll be less prone to freezing than regular laces, a problem I've had on my current trainers. Of course it may be more prone to slipping but as yet I haven't noticed a problem. The tread pattern isn't very deep, again this can either work well or not at all, I've found that while a deep tread can provide better grip it can depending on the design be prone to clogging, something I've noticed on both my Meindl Borneos and AKU Crodas, a shallower tread while offering less initial grip clears more easily, the very shallow teead on my Karrimor Pro Run trainers being a good example. 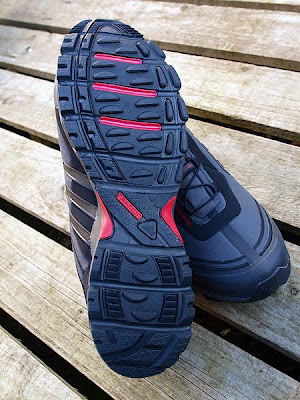 The Terrex sole falls closer to the shallow tread of the Pro Runs than the deep tread on the AKU Crodas but ultimately regardless of depth/pattern some will work better in certain conditions than in others. I haven't yet tried the Terrex in muddy conditions but on short grass and dry rock it's been fine so far. On the water repellancy I've noticed that the Terrex shed water very well, how much is down to the fabric weave and how much is down to a DWR is too early to say, they obviously aren't waterproof but they should be breathable. On breathablility I feel that they're perhaps slightly less breathable than mesh fabric unlined trainers, it's still to early to say though and short of wearing one of each it's probably going to be nigh on impossible to comment with any degree of accuracy. I found them to be pretty quick to dry but obviously as they have a slightly padded inner they will retain more water than my Karrimor Pro Runs which are almost entirely mesh with little or no inner fabric at all. Of course the Karrimor's are very thin and obviously wouldn't be to everyones taste. Unfortunately due to other commitments I haven't had a chance to really put the Terrex Seamless to the test. I did manage a short walk on the North Coast and on the varied rock the grip felt good and so far though I'm delighted with them. 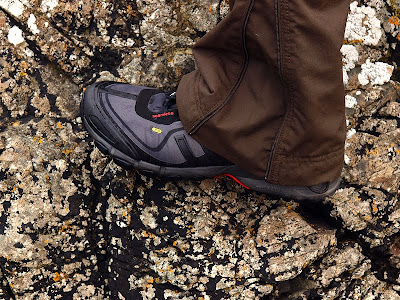 As with any gear there are compromises and you have to decide which compromises work best for the intended use. I wanted a trainer that was comfortable for walking, reasonably water resistant but with ease of drying more important. The smooth face fabric while it may prove to be less breathable than mesh doesn't retain mud etc which helps keep the floor of the canoe clean which is desirable when you're kneeling. The quick lacing system is easy to operate even when the shoes are wet where regular laces can be difficult to untie once they're wet and the knot has been pulled tight, additionaly thanks to the elastic loop the cord is out of harms way where it can't get caught on fittings in the canoe just as you're about to stand up to pole rather than paddle. For those interested in the weight they come in at 760g pair/Size 10 which is pretty good. 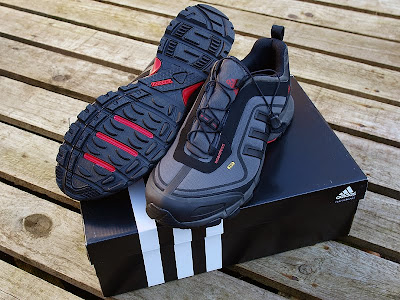 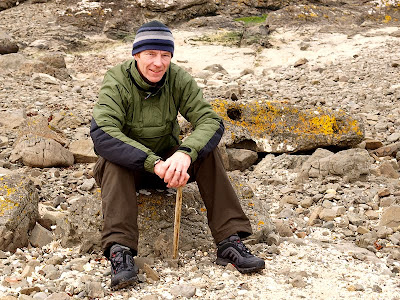