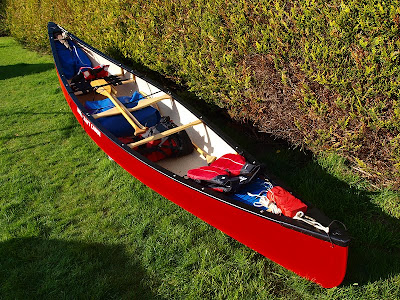 I'm pretty much set for a 4 man/3 craft trip on the lower Bann canoe trail. Ralph and myself will be taking the Novacraft Prospector accompanied by another colleague from work and his mate using sit-on-top and closed deck kayaks respectively.

The Lower Bann Canoe Trail starts at Toome shortly after the river Bann exits Lough Neagh on it's way to the Atlantic. The trail is 58km although we'll be lifting out about 7km short for a variety of reasons not least ease of access for the pick-up the following day.

The river Bann as it runs from Lough Neagh to the sea forms the boundry between counties Antrim and Londonderry almost all the way, only swinging over to the Derry side as it nears the town of Coleraine. Points of interest along the way start with Toome itself, one of Irelands earliest hunter/gatherer settlements and within 200m of leaving the start point are the eel traps which are passed by staying to the East bank. From there on 4 sets of lock gates need to be navigated. Sites of historical interest stretch the length of the route dating from Mesolithic times to the present, the historical importance of the river Bann is evident. 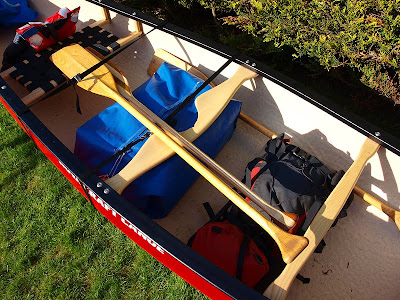 The kit for this trip is quite different from the kit I'd take backpacking, space and weight are less important but as there's a strong possibility that the canoes will need to be portaged around the locks it's worth keeping things reasonably simple. That said some kit is being taken as a test simply because we can afford the extra weight. I'm taking the Vango Halo 200 but Ralph is also bringing 2 Hennessey hammocks which with any luck we'll get to use, I'm also taking the Alpkit Rig 7 tarp. Cooking is being taking care of with a selection of stoves between the 4 of us. Ralph is taking an Optimus Nova multi-fuel, I'm taking a Trangia 27k and Backcountry Boiler and and Derek is bringing an EK Kombi woodstove so cooking shouldn't be a problem. As far as sleeping kit goes I'm using a synthetic bag (Snugpak Premier 1) and a Millets CCF mat. As for food well that's going to be the main difference, rather than a selection of freeze dried/dehydrated food it'll be real food this time and a fry up in the morning is something to look forward to. As far as kit storage goes there were various options available but in the end we decided on a rucksack each with personal kit and a large water-resistant pack for food/tent/cooking gear etc. The large pack is from a lifeboat/liferaft and is the one I found washed up near the Giants Causeway last year.

Hopefully the weather will be kind, the midges will stay away and everyone will stay upright. 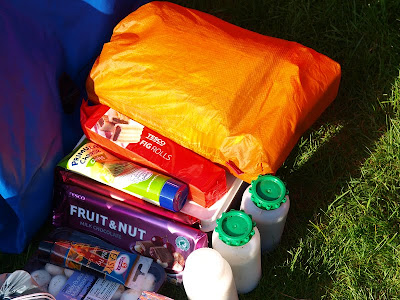 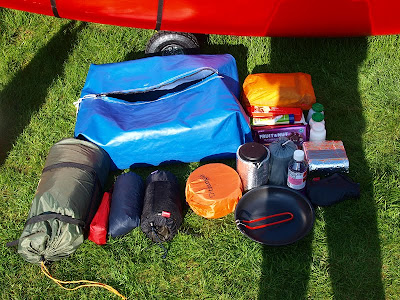