CQ CQ CQ SOTA and the 'Backcountry Boiler' on Trostan 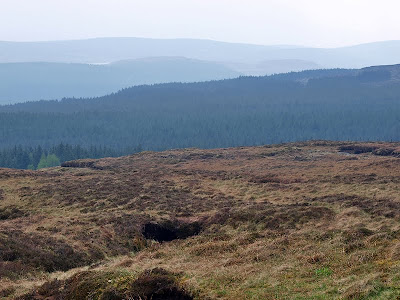 I mentioned previously that I'd recently got my Amateur Radio licence and mentioned in passing 'Summits on the Air' (SOTA). 'Summits on the Air' is an award scheme to encourage the use of amateur radio in the hills. There are currently over 50 countries with active SOTA Associations, some countries have more than 1 association, Germany for example has an association for low mountains and 1 for Alpine summits, the USA, Canada and Spain have even more associations. The UK has 5 associations, England, Northern Ireland, Scotland, Wales and the Isle of Man with each divided into regions. Northern Ireland for example has 5 regions which include the Antrim Hills, Mournes and Sperrins with a total of 66 summits, Scotland on the other hand has 6 regions with a total of 1216 qualifying. Within each region summits are awarded points with less accessible or higher summits worth more points.

Participation can be as an Activator (the guy on the summit) or as a Chaser (generally the guy operating from home although if you're on a summit as an Activator and respond to a call from another summit Activator then you are also a chaser. To 'Activate' a summit and claim the points you need to make 4 contacts, a Chaser only needs to make one contact to obtain the points.

As with most things related to the outdoors it's a question of compromises when it comes to radio gear, do you carry a lightweight handheld (walkie talkie) operating on VHF with 5 watts or do you carry a heavier radio capable of longer distance and operating on HF/VHF with 50 watts plus but weighing perhaps 4kg and needing an external battery pack which may be in the form of a 'SLAB' (Sealed Lead Acid Battery). The same applies to antenna, even using a handheld there's a choice between the supplied whip antenna or an external antenna, either an omni directional or directional which needs to be mounted on a mast. There's plenty to choose from whether you're looking at radios or antennas and numerous pro's and con's.

I'm currently using a Chinese handheld, Wouxun KG-UVD1P Dual Band (VHF/UHF) which weighs 402g including whip antenna, an external waterproof microphone adds a further 116g. My total radio kit weight comes in at approx 800g, not heavy for a radio set-up but to put it in perspective some tents are lighter. 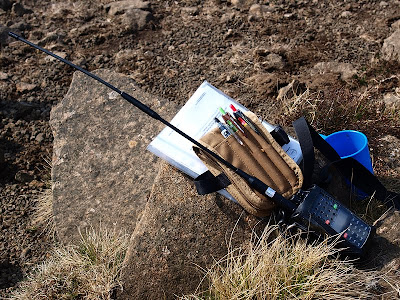 I find it quite relaxing to be honest as on the hill I normally rush from place to place but when trying to activate a summit and needing 4 contacts to do so I have to settle down stay in the same place for a while which is a nice way to spend a few hours on a pleasant day although I imagine it isn't quite so nice in wet weather.

I'd been out on Slemish on Saturday with Ralph who got me involved in amateur radio and we'd both managed to Activate the summit but I wanted to get out again this week to try to Activate Trostan. I'd finished my shift on Tuesday evening but spent all day Wednesday tidying up the garden, getting the grass cut and so on so that I'd be free to get out on the hill. Ralph couldn't make it but mentioned that he might listen out for me so I sorted out my kit ready for today.

I'd just received a new wood stove, the 'Backcountry Boiler' from Devin Montgomery so decided to take it along. While there are no trees on Trostan there's a forest section starting at the car park so I knew I'd be able to pick up some fuel on route, as a back up and to see how the 'Backcountry Boiler' worked with a meths burner I took the burner from my Trangia 27k. The BCB can with care be used to carry water, there's a silicone stopper but I'd recommend packing it carefully and not throwing your pack around too much. 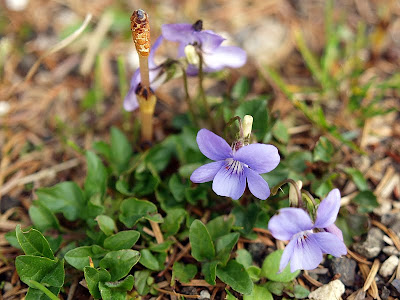 It was warm and quite bright when I arrived at the parking spot but there was quite a bit of haze, I'd taken the Peter Storm fleece jacket and a Montane windshirt in case it was cool on the summit as I knew I'd be sitting around for a while. It was warm enough to begin with to wear only a long sleeve Heattech t-shirt and I also wore the Peter Storm Active trousers and Adidas Terrex Seamless trainers. I'd brought a small A5 Alpkit stuff sack to carry wood collected on route and had easily found enough but rather than put it back in my rucksack I'd tied it to the hipbelt. 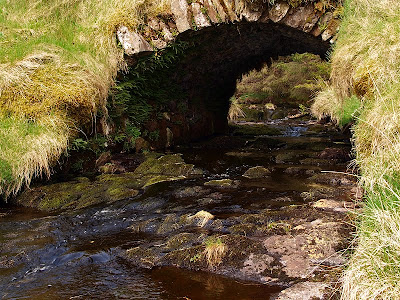 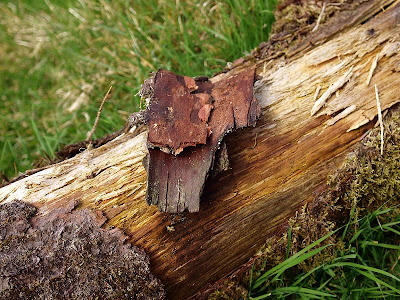 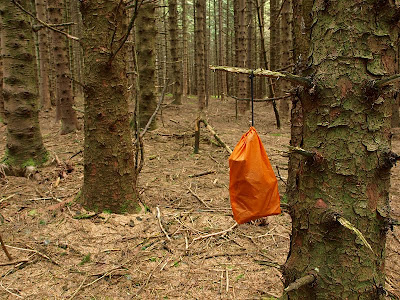 Having left the forest and at about 1/3 of the way to the summit I stopped for a drink at a spot where the water flows out from underground and over a large rock. It wasn't until I was ready to move on that I realised I'd somehow lost the stuff sack with the wood I'd collected. I didn't want to go looking for it and as I had the Trangia burner as back-up I figured I'd be fine and could look for the stuff sack on the way back. 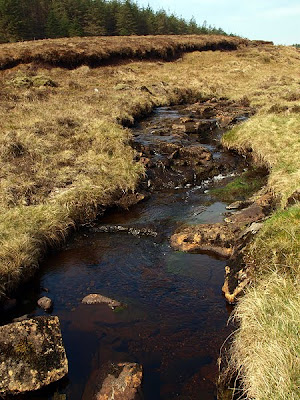 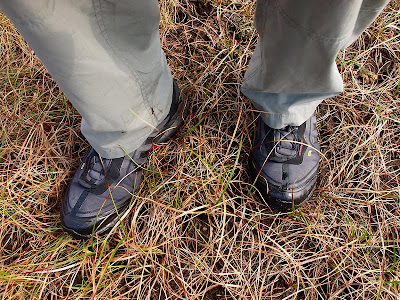 It didn't take long to reach the summit but there was a bit of a breeze and it felt quite chilly so I pulled on the windshirt to begin with but soon swapped it for the fleece and swapped baseball cap for a beanie although the Peter Storm trousers proved to be sufficiently windproof. Having found a reasonably comfortable spot I got my kit sorted out and sat down to try to make a contact. It didn't take long before I had a response from a guy in Armagh city followed soon after by a response from a guy driving near Portadown who kindly stopped to complete the contact. With 2 contacts made and 2 to go I set about making a brew, the Trangia burner fits perfectly into the fire cup of the Back Country Boiler and after a few strikes from a flint and steel I had the burner going. It took around 8 minutes to reach a strong rolling boil with the boiler filled to the maximum, I'd be happy with that level of performance given that I was on the open hill and it was quite breezy. 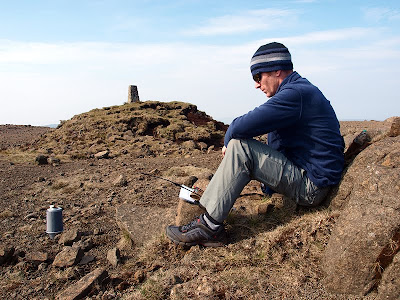 I'd just finished my coffee when Ralph came on the air, he'd decided to go up another summit (Agnews Hill) near to where he lives to help me activate Trostan so we chatted for a bit before another guy broke in to make contact. That gave me the required 4 contacts but Ralph still needed a further 2. We then picked up a very strong signal from from another user, this time an Activator working from the summit of Ben More on Mull, both Ralph and myself managed to make contact and it was a bit of a buzz to contact someone else out on the hill. 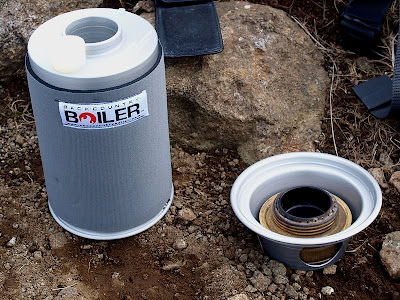 Having now had 5 contacts I decided to stand by to allow Ralph to try for the required 4th contact and I took the opportunity to fire up the BCB for another brew, in the end Ralph unfortunately didn't manage to get the 4th contact. I still wanted to try the BCB using wood as fuel and with plenty of time to spare I packed up and started to make my way back towards the forest. 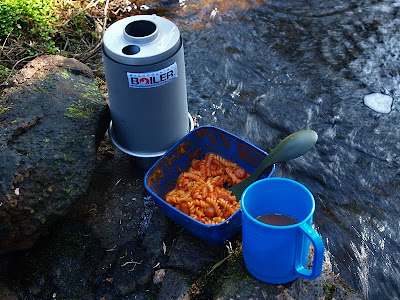 Retracing my steps I eventually found my stuff sack and made my way into the forest following a stream to a spot I'd used before. Although I'd found the stuff sack of fuel it wasn't really needed back in the forest as the ground was littered with dry twigs. I used some cotton wool coated with Vaseline and in just over 6 minutes the water had reached a strong rolling boil. 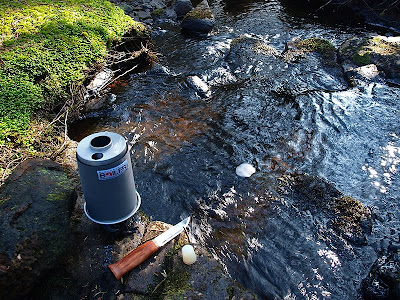 It was pleasant and warm sitting by the stream as the haze had cleared and the sun was filtering through the trees so I relaxed while my Pasta meal rehydrated. Fed and watered so to speak there was nothing much to do but leave the forest by way of a gravel track and from there back to my car.

It was a good day out, I'm pleased to have 'Activated' Trostan and delighted with the Backcountry Boiler, it worked well with the Trangia burner as a back up and worked even better as intended, using wood as fuel.
Posted by Mac E at 22:27:00