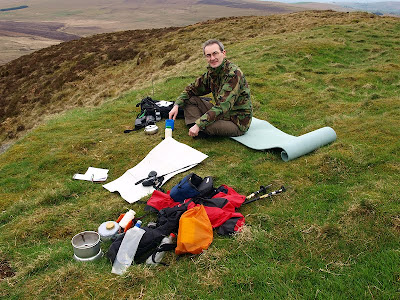 It's been a bit hectic here for the past few weeks for a variety of reasons but touch wood things are getting back to normal just in time for the holidays. I've recently managed to get my Amateur Radio Licence, my Mum was in hospital for a week (nothing serious I'm pleased to say) I had the Adidas Terrex Seamless trainers from Webtogs for review and also received a few items from Millets for review. I'm currently in the middle of a shift change at work so although I only had today off once I get another 3 shifts done I'm on holidays for almost 2 weeks and I have a few things planned including a 2 day canoe trip.

The Adidas trainers have had plenty of use but not under the circumstances I'd envisaged, what I can say is that they're comfortable and I'll be using them from now through the next few months.

The Amateur Radio licence was a case of grabbing an opportunity, Ralph who I've mentioned here before has held an Amateur Radio licence for some time, in fact he has the Intermediate license mentioned that a local club was running a course and that as his son was going to attend I might like to sit the course too. I hadn't considered it before and although I wasn't sure what I'd do if I did pass the exam I decided to go anyway. In the end I passed the exam and obtained the licence and have discovered that like backpacking there are a variety of ways to use Shortwave Radio. The one that fits best with backpacking is probably 'Summits on the Air' (SOTA). To cut a long story short you need to make 4 contacts from one of the designated summits to claim the points, summits are worth varying amounts of points depending on height, ease of access etc. Obviously you can use pretty much any transceiver if you can carry the associated equipment but it lends itself to small handheld or mobile radios and lightweight antennas. As a Foundation licence holder I'm restricted to 10 Watts so I bought a small Chinese made Dual Band handheld which runs at 5 watts max. At present I'm using a regular whip antenna but I've found plans for a MYOG lightweight Yagi directional antenna, the plans surprisingly were on Backpacking.net/make gear.

On the gear front I'd had an e-mail from Millets asking if I'd like to review some of their own brand kit, Peter Storm/Eurohike. On the understanding that I'm free to give my own opinion I accepted and picked a few items I thought I could use namely a Peter Storm Fleece jacket and Peter Storm lightweight cargo trousers. I'd also picked a nice looking frying pan with a folding handle but hadn't checked the dimensions. It's a bit too big for backpacking but for car camping it looks like a very good alternative to the regular pan we currently use, it might just get to go on the canoe trip.

Although I only had today off work I was keen to try out the new kit from Millets, try the Terrex Seamless on the hill and have a go at SOTA so Ralph suggested we meet up at Slemish, a small local hill associated with Saint Patrick. It was dry but overcast when we set off from the car park and I'd felt a little cold while standing around before setting off so had pulled on my Paramo VAL. I was already wearing the Peter Storm fleece and we hadn't gone far until I was much too warm and had to remove the VAL again. Unlike most of the Antrim hills Slemish isn't surrounded by peat bogs so I wore the Terrex Seamless without Gore-Tex socks and had no issues with wet feet. On the few rocky bits I had plenty of grip so choose to avoid the heather and use the rocks where possible. 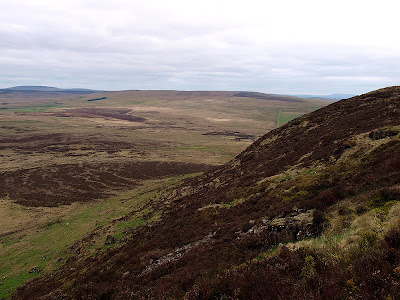 It didn't take long to reach the top so once we'd found a suitable spot a few meters from the summit we settled down, Ralph operating his handheld radio while I set the Trangia up to get a brew on. 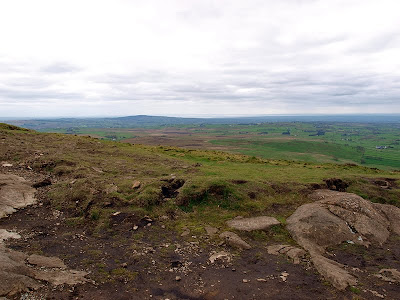 In the end we both managed to make the required 4 contacts although it was a bit quiet to start with. Although I was a bit shaky to start I relaxed a bit and things started to come together a bit better. It's a bit nerve wracking going on air at the start as anyone listening in knows by your call sign that you're a beginner and I suspect that like most other pastimes there are those who prefer to listen in and criticise rather than make contact and offer constructive criticism or advice.

It was all a bit rushed having been planned at work but I'd packed the Alpkit Rig 7 tarp in case it started to rain while we were out, in the end it didn't rain but just before we packed up to return to the cars I pitched it up in a couple of different configurations mainly to see how it fared on the uneven ground of a hill top. In the end it went up easily so I'm sure it'll be a regular on the kit list next time I'm out. 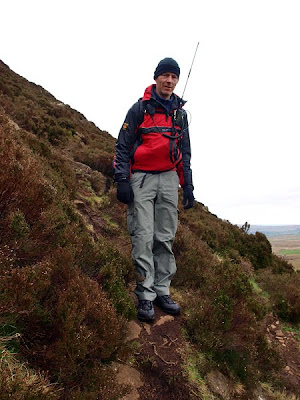 Although it wasn't a major outing it was important to me as a starting point and I'm now looking forward to getting through the next few shifts and getting out again over the holidays. 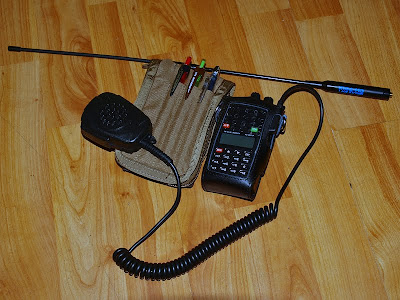