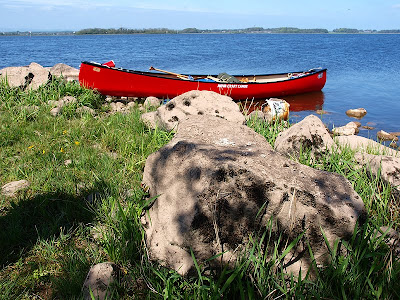 I got back from the canoe trip on Thursday evening after 2 days of bright sunshine and intense heat. The trip was a good one but not without unforeseen problems that resulted in failing to reach our intended destination. 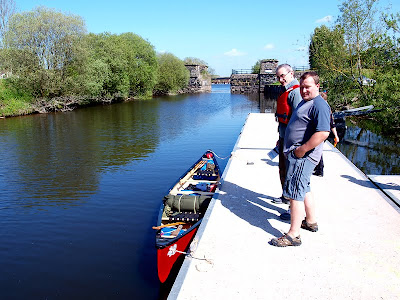 A late start on Wednesday morning meant we didn't leave the jetty at Toome until around 12.30pm but with scant regard for the 15 miles between us and the halfway point of our route we set off. Although we were going as a group of 4 we weren't operating entirely as a group nor were we operating as pairs and yet we weren't operating solo either. Cooking was something of a combined effort but only Ralph had a stove suited to group use in the form of the Optimus Nova and the only pan big enough to cater for 4 was the Millets non stick frying pan I'd received for review. I had the Backcountry Boiler and a Trangia 27k both of which are better suited to 1-2 person use and Derek and Colin had between them a disposable barbecue and an EK 750 woodstove, the EK 750 being a solo stove designed to use with an Alpkit Mitymug sized pot.

Although Derek and Colin had settled on their shelter by taking a tent Ralph and I changed our plans slightly and decided not to take a tent, Ralph provided 2 Hennessy Hammocks and also took a Belgian (I think) army bivvy bag and I took a TiGoat Ptarmigan bivvy and CCF mat in case we ended up camping in a spot with no suitable trees. The combined kit was something of a mixed bag which was to be expected as it was something of a 1st for us all and the final arrangements were made via text message/phone. Ralph who partnered me in the open canoe hadn't been in a canoe before and although Derek and Colin had canoed together before they hadn't undertaken a trip of this length/duration. 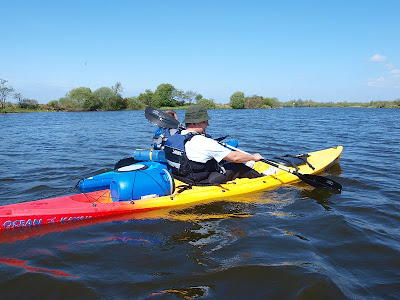 With the canoes loaded up the 1st thing that became apparent was that Derek's sit-on-top was quite low in the water due to a heavier than normal load, the result meant he was sitting in a few inches of water in the open 'self draining' cockpit, Colin had no such problem in his regular kayak while Ralph and myself took a little time to find our rhythm. With the sun shining brightly in a cloudless sky and with a slight following wind we left the canal passing the eel traps and soon slipped under the bridge towards Lough Beg. 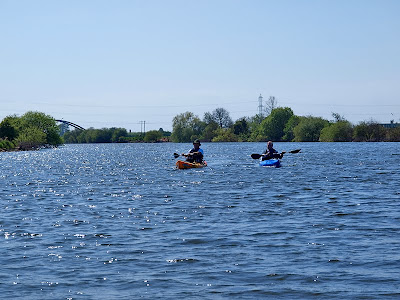 Lough Beg is a nature reserve and is quite shallow apart from the actual navigation channel which is clearly marked, the West shore is mainly wetland which floods in winter. Church Island is also on the western side of the lough, the ruined church and spire dates back to the 18th century but the site was formerly a pre Viking monastery. Church Island isn't actually an island when the water level is low but like much of the western shore the low lying ground connecting it to the mainland floods in winter when the water level is higher. On this occasion we didn't visit Church Island due to time constraints but rather stayed on the eastern shore although we did stop briefly. 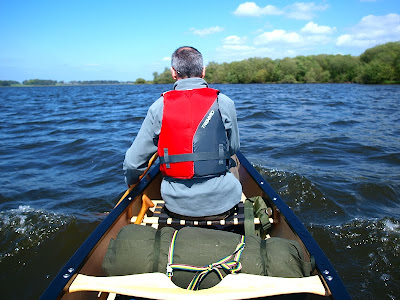 Shortly after leaving Lough Beg we stopped at the 1st official access point since leaving Toome. Newferry East and West has access on both sides of the river and we choose to tie up at the canoe jetty on the east bank to have lunch.

Although it's now a popular waterski venue (we didn't see any) there was an actual ferry across the river in the 1800's. The area around Newferry is designated as an area of special scientific interest due to the presence of Diatomite, used in the past in the production of gramophone records and dynamite, pretty versatile stuff then.. 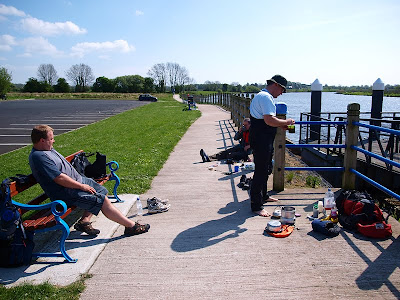 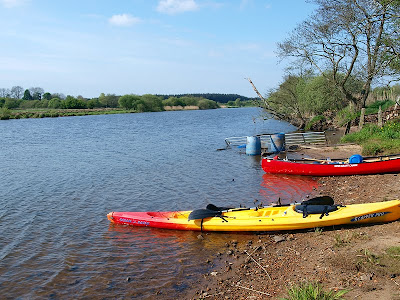 With lunch taken we set off once again and in an attempt to lighten the load and reduce the drag on the sit-on-top we took the waterproof barrel that Derek had been carrying. The next stretch was more interesting as as it wound it's way towards the village of Portglenone, home to Northern Ireland's only Cistercian Monastery. On this section there's quite a lot of woodland along the banks and rounding a bend we discovered a rather tired looking boat moored up under the overhanging bushes. A little further on the river passes through Portglenone forest and bluebells could be seen amongst the trees. 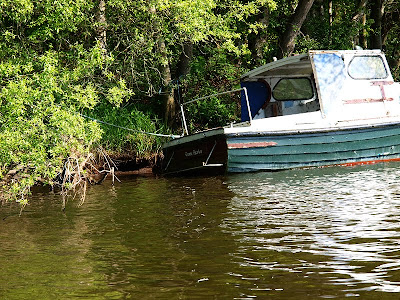 At yet another canoe jetty we stopped for a breather, we hadn't been stopped for long when a small powerboat approached slowed down and looked like it was going to come alongside, turned out it was another guy from work so we stopped and chatted for a bit. I noticed that there were some birch trees so collected some bark off one that had toppled over. 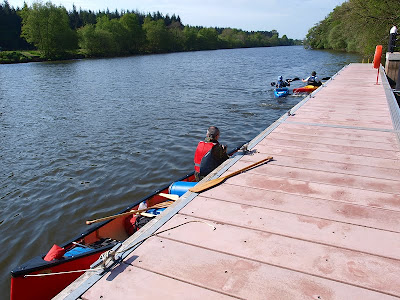 It was just past 5.00pm when we slipped underneath the bridge at Portglenone and with another 9km to go before we reached our intended stop we pressed on. It's probably fair to say we were all looking forward to setting up camp and getting a meal but for Derek on the sit-on-top there was an added incentive, with the canoe carrying a lot of gear and sitting low in the water the self draining cockpit had been flooded for the best part of 5 hours so he'd been more or less sitting in the water all day which I guess must have been pretty unpleasant.

Although it was cooler now energy levels were pretty low and we were glad to see the jetty come into view. With the canoes lifted out we began to look around for a decent spot to set up camp, the difficulty was in finding a spot that was equally suited to hammocks and a tent but in the end we found a spot amongst the trees that was clear enough to cook for the hammocks and another a few yards away that was reasonably flat and clear of brambles to set up the tent although unfortunately there was a high bank separating the 2.

Colin and Derek set up their camp and lit the barbecue while Ralph and myself set about getting the hammocks up and getting a meal under way. I'd brought a variety of food for the evening meal and in the end decided on 'Look What We Found' meatballs in a tomato and herb sauce with some Smash while Ralph prepared some rice, curry and sausage. I fired up the Backcountry Boiler using some of the birch bark I'd picked up earlier and a few twigs that were laying around and quickly boiled up some water for coffee while Ralph produced some tubs of fruit and custard which went down a treat. 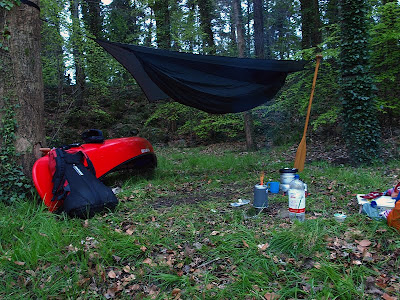 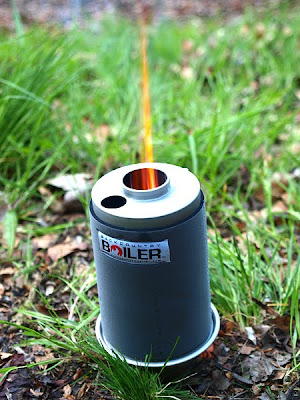 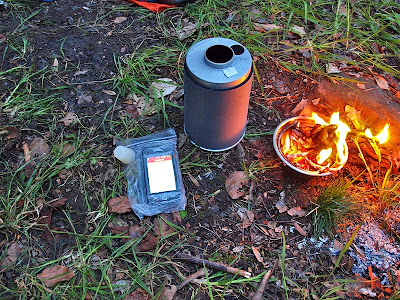 With the evening meal over we walked up to the others to find that they'd had a couple of steaks on the barbecue and were using the still glowing coals as a base to build a campfire. Surprisingly although we could see and hear midges they were swarming around the treetops and we had no trouble from them at all. Not wanting to be outdone Ralph and myself went back to our camp to light a fire but having dug a shallow pit we didn't have quite as much success and were the subject of some ribbing from Derek and Colin. 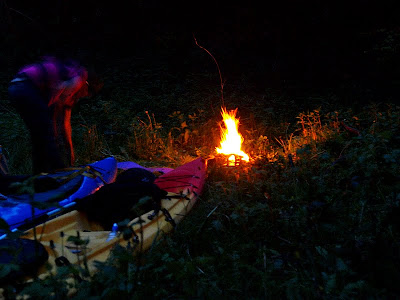 We eventually all returned to our respective camps and while Ralph relaxed in his hammock I laid out my sleeping mat and leaned back against the upturned canoe with a cup of Starbucks Via instant coffee. At about 11.30pm I decided to turn in and shoved my sleeping bag, a Snugpak Premier 1 synthetic into the hammock. Although I was aware of potential heat loss due to a lack of insulation underneath I didn't bother to use my CCF mat which turned out to be a mistake. I hadn't previously used a hammock and as a side sleeper I was unsure how I'd fare but it was the cold that was the biggest problem.

While I was fine to begin with I only managed to doze and couldn't quite get over to sleep, I persevered until about 2.00am when a combination of cold and hunger had me out of the hammock and on the ground with the sleeping bag inside the TiGoat bivvy. After a chocolate bar I drifted off to sleep thinking of the sluice gates, flood barriers, weirs and locks not to mention the 24km that lay ahead of us.
Posted by Mac E at 20:36:00