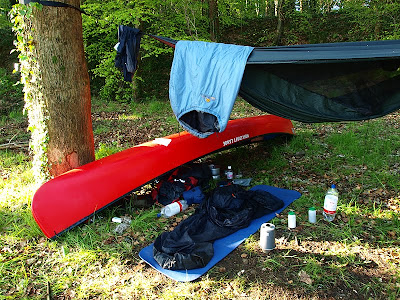 Having had to abandon the hammock due to feeling cold I'd eventually got over to sleep in the bivvy bag but wakened at around 5.30am as the sky started to lighten. As everyone else seemed to be sleeping soundly I turned over and fell asleep again wakening at around 7.30am with the sun now shining brightly and sunlight filtering through the trees. Not quite ready to emerge from my sleeping bag I filled the Backcountry boiler and grabbed some twigs that had been laying under the upturned canoe and boiled some water for a cuppa. Ralph emerged from his hammock just then so we both had a cuppa and a wander around. 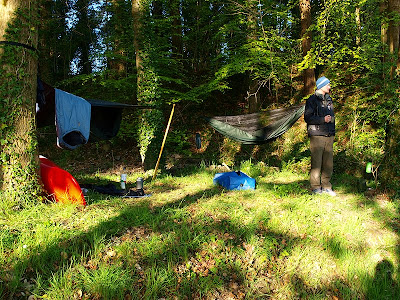 It wasn't long before Colin and Derek appeared so we decided to pool our resources for breakfast. With most of the camping kit stowed away we carried the cooking gear down to a picnic table near the jetty to prepare breakfast. Ralph using the Optimus Nova and the Eurohike frying pan made a start on the sausages and bacon while I started to fry up mushrooms, pancakes, potato bread and eggs. While the cooked breakfast was being prepared Colin and Derek boiled water for coffee and kept up a steady supply of cheese and salami. It was a bit tricky to synchronise everything so breakfast was eaten bit by bit as the various items became available eventually followed by some Kenyan ground roast coffee (I'd packed a cafetiere) 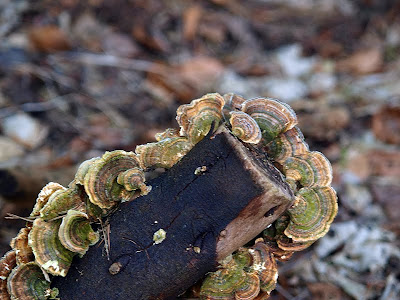 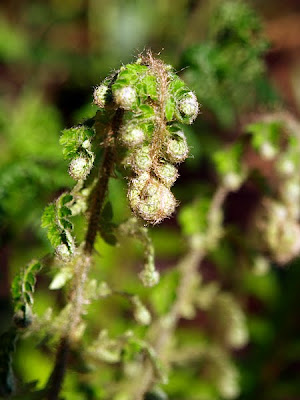 It was past 10.30am by the time the camps had been tidied up and left as found and the canoes and gear carried back down to the jetty. Already the temperature was high so water bottles were filled and stashed within easy reach before we set off towards the 1st of the 4 locks we had ahead of us. 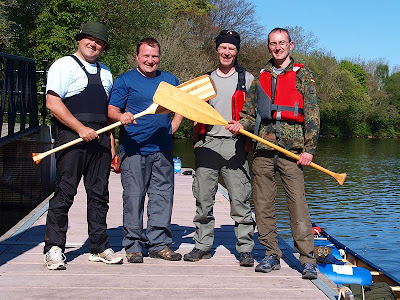 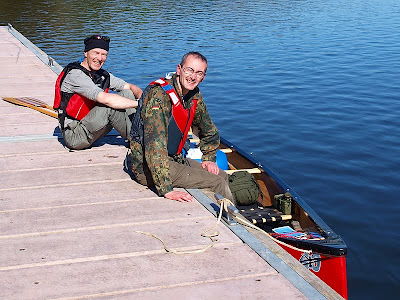 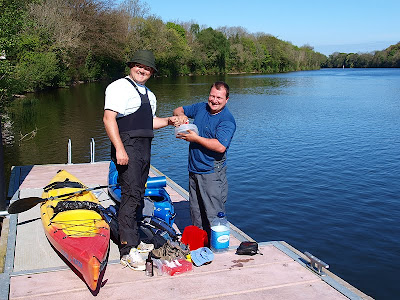 The 1st lock, Portna was less than a a mile away and is reached by a short canal on the West bank avoiding the flood gates. On reaching the lock we checked the sign to see what the opening times were as the locks aren't attended continually. 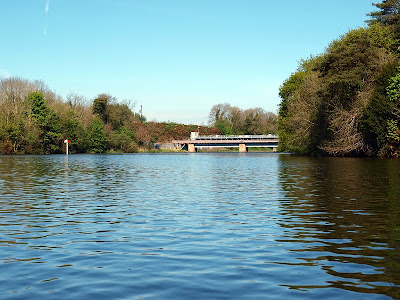 According to the sign the lock should have been open from 10.30am but there was no sign of a lock keeper so we resigned ourselves to portaging around. Fortunately Portna is only a double lock but it would have been faster not to mention easier to have used the lock rather than having to portage. While we were getting sorted having portaged around to reach the jetty Ralph stopped to talk to a guy from the rivers agency, after a few phone calls it was arranged that the lock keeper would let us through the following 2 sets of locks at Movanagher and Carnroe. 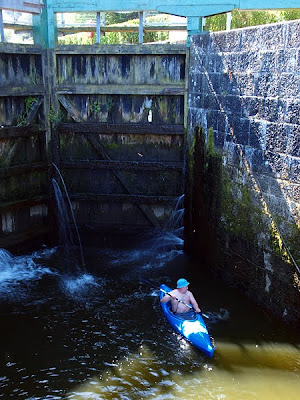 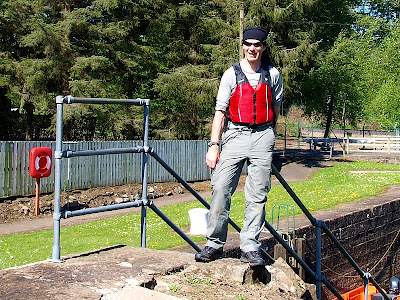 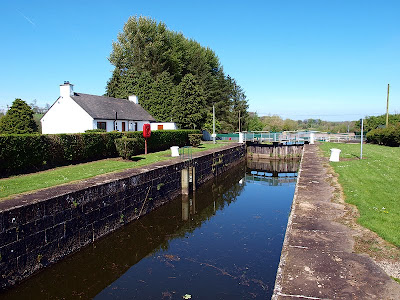 It was about 11.30 when we set off again and after 1km we passed under the road bridge leading to the nearby town of Kilrea with 4km to go to the 2nd lock at Movanagher. It took us almost an hour before we entered the canal at Movanagher, this time on the East bank avoiding a weir so we tied up at the jetty while Ralph went to find the lock keeper. As it turned out the lock keeper couldn't be found although we did manage to find a guy who was working at the fish farm on the other side of the canal. 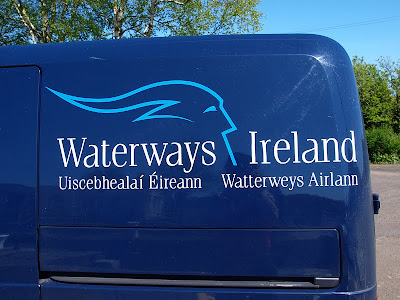 A few more phone calls to various departments failed to locate the elusive lock keeper but eventually contact was made. Of course by now we'd wasted half an hour and he was in Coleraine 20 or so km away and on his lunch break. Faced with a choice of portaging through with the assurance that he'd meet us at the 3rd lock, Carnroe 2 km away or waiting until after 2.00pm to get through the lock we were at we decided to portage again. The canoes were unloaded once again and after a few trips back and forth we were ready to go, one bonus was that we were able to replenish our dwindling water supply.

Although the next lock at Carnroe was only 2km away there seemed little point in rushing if there was going to be no one there until 2.00pm anyway so we sat about for a bit before setting off again.

We eventually arrived at Carnroe at almost 2.00pm and to our surprise the elusive lock keeper was waiting, wearing a red polo shirt I think the lock keeper may well be the Scarlett Pimpernell. Without stopping we paddled into the lock, Carnroe being a single and listened while the lock keeper offered advice on what we should have done i.e. let the appropriate body know that we were going to be "in the system", that failing to do so was "a bit silly", that they (who ever they may be) were "short staffed" and that it would have been "easier" if he'd known we were going to be needing to use the locks. Easier for us I assume as it could hardly have been any easier for him as he's thus far managed to open one set of lock gates while we'd carried around 4. There seemed little point in wasting time 'discussing' the situation, better to sit tight, say nowt and get on with it. 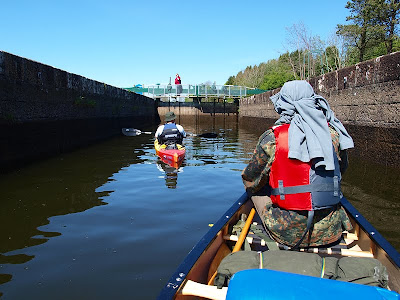 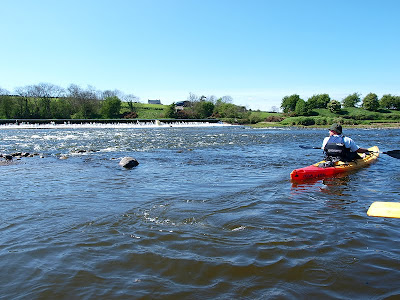 It was quite amusing though as we speculated on where he'd been and where he possibly should have been and whether he'd been disturbed by his employers after we called the head office (inadvertantly) to find out where he was. In the end I discovered that officially it's best to arrange to pass through the locks although it isn't mentioned on the Canoe trail guide. I found the information on the 'Waterways Ireland' website but it doesn't mention how much notice they need. In the end though it wasn't a big deal, it isn't like we had to portage around Neptunes Staircase on the Caledonia canal.

It only took 5 minutes or so to go through the lock and we set off again towards the next access point at Drumaheglis marina 7.5km away and from there the final 7km to the last lock of the day and indeed of the Bann itself at the Cutts, so named as the rock was cut away to form the channel allowing boats to continue on upstream. From the Cutts we'd only have a further 2km to go to reach our destination at Somerset Riverside Park, a total of 16.5km.

We had only been paddling for about 10 minutes after leaving the lock at Carnroe when we saw 2 kayaks heading towards us, it wasn't until they were right beside us that we realised they were another 2 guys from work. They had put in at Drumaheglis marina and were just out for a quick paddle up to the lock at Carnroe. We rafted up with them while drifting slowly downstream and chatted for a bit before they set off again upstream and we continued on our way. As we hadn't eaten since breakfast we decided to pull in at a shallow stretch for a late lunch. 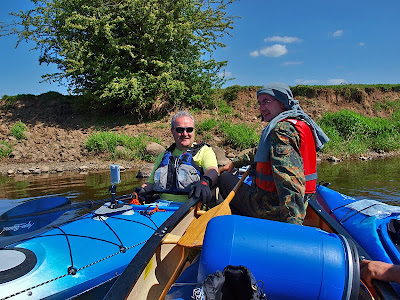 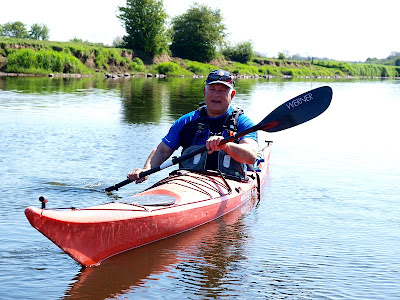 It was now well past 3.00pm and while we were all suffering from the heat Derek was suffering more than the rest of us, not from the heat but from a sit-on-top that felt dead in the water and almost 5 hours effectively sitting in the water. With the prospect of a further 11.5km to go we reluctantly decided that we'd stop at Drumaheglis marina rather than continue to Somerset Riverside Park. Additionaly the next 6km or so were zoned for power boats so the decision was pretty much made to call it a day. 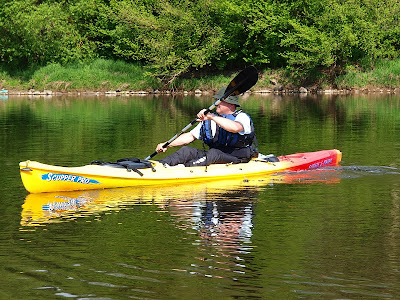 Ralph and myself reached Drumaheglis 1st but rather than tie up at the jetty which was busy with power boats we simply paddled up to the slipway and lifted the canoe out before returning to the slip to wait for the others. Although we were all on dry land we did briefly consider going a further 4km to the next access point at Camus but in the end decided against it. While Ralph went off to buy ice creams for us all Derek set about getting changed into dry clothes before phoning home to reorganise the pick up for himself, Colin and their 2 kayaks while I did the same for Ralph, myself and our canoe. We probably sat around for the best part of an hour before my wife arrived with my brother in law who was driving my car followed almost immediately by Dereks wife, strange that they should all arrive within minutes of each other as I only live about 10 miles away while Derek lives I'd guess about 35 miles away.

With everything loaded up we all set off and I guess we won't all see each other again until we go back to work. I definitely enjoyed it, it's over 20 years since I made the same trip and it's changed quite a bit since then, the facilities are much better, especially the new floating jetties and there's more activity, especially canoes/kayaks. Although we only saw 3 other canoes and 2 of them were guy we knew I can't remember seeing any others on the previous trip.

Obviously the weather being kind helped, had it been raining it would have been worse, perhaps not for Derek who was wet anyway but certainly for the rest of us. The winds when they were evident were light and on our backs and perhaps most surprising of all was that we weren't troubled by midges. 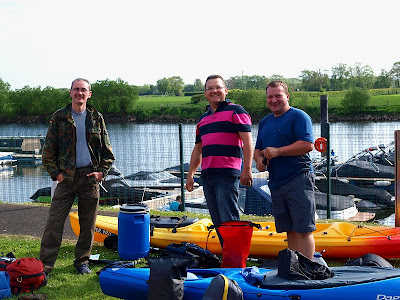