Writing in the Rain, The Uniball Power Tank 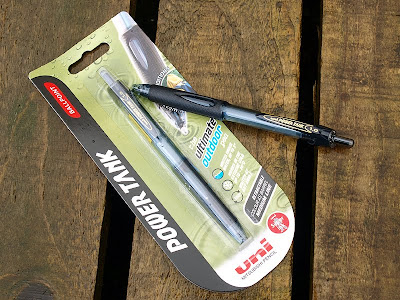 I don't normally take a notebook with me when I'm going out but due to a new venture which would require some paperwork I figured the best option would be something that would be useable even if it was raining. The obvious choice seemed to be 'Rite in the Rain', at least that's the only brand I was aware of. It's my understanding that you can simply use a pencil even if the paper is wet but to be honest I prefer a pen. Although I purchased a 'Rite in the Rain' notepad I wasn't keen on paying £10+ for a 'Rite in the Rain Pen' even though it does have a metal barrel. It so happened that I was in a newsagents today and found a pen that does the same job at a fraction of the price, £2.49 to be exact.

The pen is branded as the 'Uniball Power Tank' made by the Mitsubishi Pencil Company with a web address www.uniball.co.uk. The pens come in 3 colours, Black, Red or Blue and there's an Eco version, to quote the website

"The Power Tank Eco is manufactured from a significant proportion of recycled materials (including sawdust from our pencil manufacturing process)".

The Eco version appears to be only available in Black but refills are available for the regular Power Tank and I'm assuming the same refill fits both the Regular and Eco versions.

The Power Tank is made in Japan and is a fairly standard push button ballpoint, it's quite chunky with a slightly grippy lower section although it's like a soft plastic rather than rubber. The thing that sets it apart from a regular ballpoint is the refill, similar to the famous Fisher Spacepen the refill is sealed and pressurised which means it works upside down and can write under water (at least as far under water as I'm likely to need, the suggested depth is 3"/7cm) or on wet paper, it's also claimed to be usable at -20°c.

I've tried it out on a sheet of paper that was soaked and it worked just fine with no smearing even when I rubbed it. The pen weighs 12g but if you're really keen you could use the refill only which weighs 4g. The best thing though is the price, at £2.49 or as low as £1.80 online (before shipping) with refills costing as little as 83p. Given that it does exactly what it says there's little point on spending £10+ on the alternatives.

You can't buy direct from Uniball.co.uk but the website has a list of stockists including ASDA, Tesco, WH Smith, Morrisons etc, in the event that the 'Power Tank' isn't stocked they're available online from www.cultpens.com or www.tigerpens.co.uk.